From the June-July 2010 edition of EcoWatch Journal: 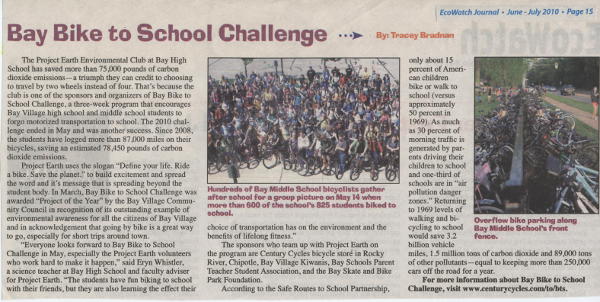 The Project Earth Environmental Club at Bay High School has saved more than 75,000 pounds of carbon dioxide emissions -- a triumph they can credit to choosing to travel by two wheels instead of four. That's because the club is one of the sponsors and organizers of Bay Bike to School Challenge, a three-week program that encourages Bay Village high school and middle school students to forego motorized transportation to school. The 2010 challenge ended in May and was another success. Since 2008, the students have logged more than 87,000 miles on their bicycles, saving an estimated 78,450 pounds of carbon dioxide emissions.

Project Earth uses the slogan "Define your life. Ride a bike. Save the planet." to build excitement and spread the word and its message that is spreading beyond the student body. In March, Bay Bike to School Challenge was awarded "Project of the Year" by Bay Village Community Council in recognition of its outstanding example of environmental awareness for all the citizens of Bay Village and in acknowledgement that going by bike is a great way to go, especially for short trips around town.

"Everyone looks forward to Bay Bike to School Challenge in May, especially the Project Earth volunteers who work hard to make it happen," said Eryn Whistler, a science teacher at Bay High School and faculty advisor for Project Earth. "The students have fun biking to school with their friends, but they are also learning the effect their choice of transportation has on the environment and the benefits of lifelong fitness."

According to the Safe Routes to School Partnership, only about 15 percent of American children bike or walk to school (versus approximately 50 percent in 1969). As much as 30 percent of morning traffic is generated by parents driving their children to school and one-third of schools are in "air pollution danger zones." Returning to 1969 levels of walking and bicycling to school would save 3.2 billion vehicle miles, 1.5 million tons of carbon dioxide and 89,000 tons of other pollutants -- equal to keeping 250,000 cars off the road for a year.