Posted March 10, 2011 to the online edition of Crain's Cleveland Business: 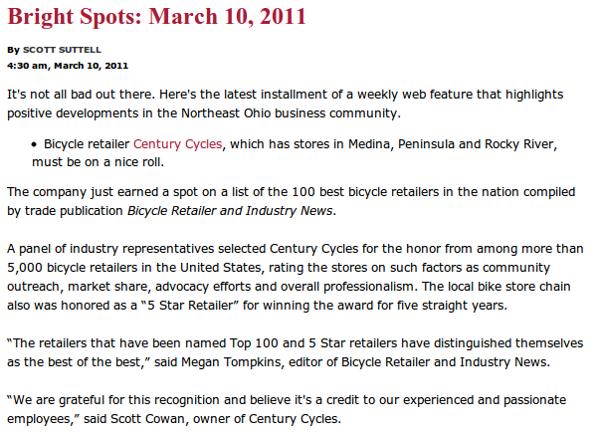 It's not all bad out there. Here's the latest installment of a weekly web feature that highlights positive developments in the Northeast Ohio business community.

The company just earned a spot on a list of the 100 best bicycle retailers in the nation compiled by trade publication Bicycle Retailer and Industry News.

A panel of industry representatives selected Century Cycles for the honor from among more than 5,000 bicycle retailers in the United States, rating the stores on such factors as community outreach, market share, advocacy efforts and overall professionalism. The local bike store chain also was honored as a “5 Star Retailer” for winning the award for five straight years.

“The retailers that have been named Top 100 and 5 Star retailers have distinguished themselves as the best of the best,” said Megan Tompkins, editor of Bicycle Retailer and Industry News.

“We are grateful for this recognition and believe it's a credit to our experienced and passionate employees,” said Scott Cowan, owner of Century Cycles.