From the July 1, 2014 issue of Bicycle Retailer & Industry News: 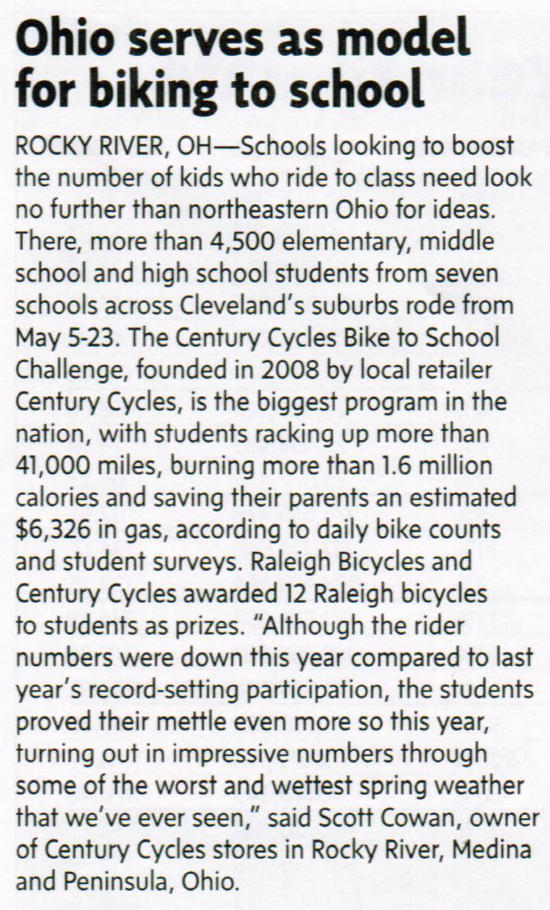 Ohio serves as model for biking to school

ROCKY RIVER, OH - Schools looking to boost the number of kids who ride to class need look no further than northeastern Ohio for ideas. There, more than 4,500 elementary, middle school and high school students from seven schools across Cleveland's suburbs rode from May 5-23. The Century Cycles Bike to School Challenge, founded in 2008 by local retailer Century Cycles, is the biggest program in the nation, with students racking up more than 41,000 miles, burning more than 1.6 million calories and saving their parents an estimated $6,326 in gas, according to daily bike counts and student surveys. Raleigh Bicycles and Century Cycles awarded 12 Raleigh bicycles to students as prized. "Although the rider numbers were down this year compared to last year's record-setting participation, the students proved their mettle even more so this year, turning out in impressive numbers through some of the worst and wettest spring weather that we've ever seen," said Scott Cowan, owner of Century Cycles stores in Rocky River, Medina and Peninsula, Ohio.