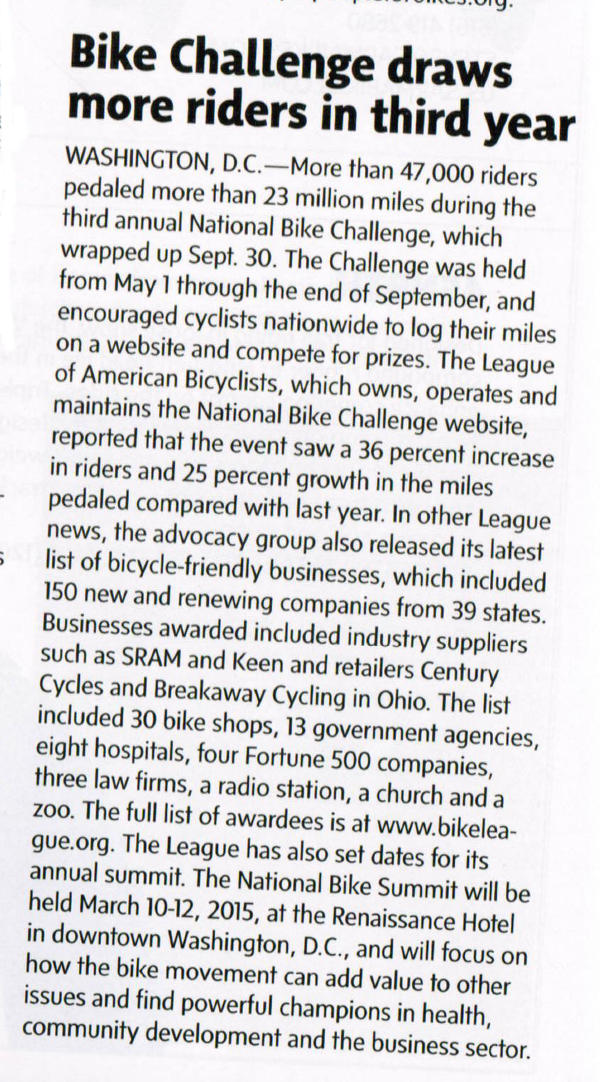 WASHINGTON, D.C. - More than 47,000 riders pedaled more than 23 million miles during the third annual National Bike Challenge, which wrapped up Sept. 30. The challenge was held from May 1 through the end of September, and encouraged cyclists nationwide to log their miles on a website and compete for prizes. The League of American Bicyclists, which owns, operates and maintains the National Bike Challenge website, reported that the event saw a 36 percent increase in riders and 25 percent growth in the miles pedaled compared with last year. in other League news, the advocacy group also released its latest list of bicycle-friendly businesses, which included 150 new and renewing companie from 39 states. Businesses awarded included industry suppliers SRAM and Keen and retailers Century Cycles and Breakaway Cycling in Ohio. The list included 30 bike shops, 13 government agencies, eight hospitals, four Fortune 500 companies, three law firms, a radio station, a church and a zoo. The full list of awardees is at www.bikeleague.org. The League has also set dates for its annual summit. The National Bike Summit will be held March 10-12, 2015, at the Renaissance Hotel in downtown Washington, D.C., and will focus on how the bike movement can add value to other issues and find powerful champions in health, community development and the business sector.