American Bicyclist is the member magazine of the League of American Bicyclists, and the July/August 2011 issue featured a story about the Bike To School program that Century Cycles has helped to organize: 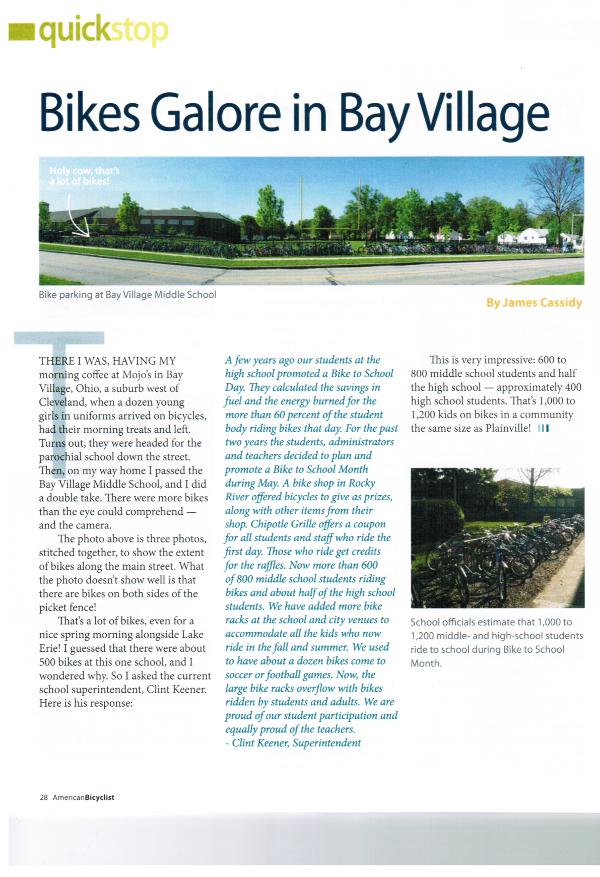 There I was, having my morning coffee at at Mojo's in Bay Village, Ohio, a suburb west of Cleveland, when a dozen young girls in uniforms arrived on bicycles, had their morning treats and left. Turns out, they were headed for the parochial school down the street. Then, on my way home I passed the Bay Village Middle School, and I did a double take. There were more bikes than the eye could comprehend--and the camera.

The photo above is three photos, stitched together, to show the extent of bikes along the main street. What the photo doesn't show well is that there are bikes on both sides of the picket fence!

That's a lot of bikes, even for a nice spring morning alongside Lake Erie! I guessed that there were about 500 bikes at this one school, and I wondered why. So I asked the current school superintendent, Clint Keener. Here is his response:

A few years ago our students at the high school promoted a Bike to School Day. They calculated the savings in fuel and the energy burned for the more than 60 percent of the student body riding bikes that day. For the past two years the students, administrators and teachers decided to plan and promote a Bike to School Month during May. A bike shop in Rocky River offered bicycles to give as prizes, along with other items from their shop. Chipotle Grille offers a coupon for all students and staff who ride the first day. Those who ride get credits for the raffles. Now more than 600 of 800 middle school students riding bikes and about half of the high school students. We have added more bike racks at the school and city venues to accomodate all the kids who now ride in the fall and summer. We used to have about a dozen bikes come to soccer or football games. Now, the large bike racks overflow with bikes ridden by students and adults. We are proud of our student participation and equally proud of the teachers.
- Clint Keener, Superintendent