Thanks to the Akron Beacon Journal for stopping by our Peninsula store to talk to Store Manager Doug Charnock for their article on the economic impact of the National Parks. 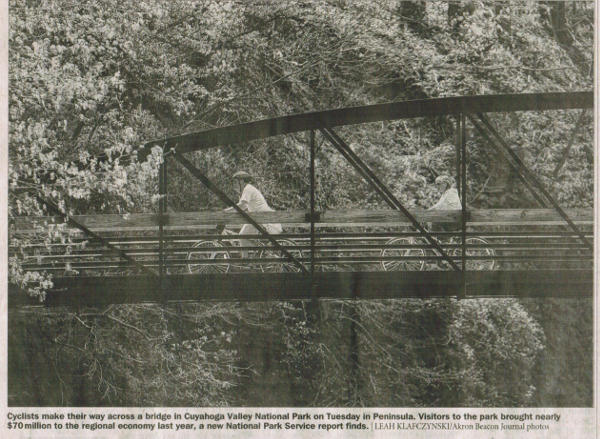 PENINSULA: There's a laminated map on the ceiling over the checkout counter at Century Cycles. It's covered with colored dots indicating the countries of customers who patronized the popular bike rental site.

In terms of a new National Park Service report, those dots might as well be dollar signs.

The Cuyahoga Valley National Park that surrounds this bucolic village of 563 people is an economic engine for the region, with visitors spending nearly $70 million in the area last year, the new report said.

More than 2.4 million people visited the 33,000-acre park, which straddles Summit and Cuyahoga counties, providing an overall impact of $87 million to the local economy.

Century Cycles store manager Doug Charnock said the foreign visitors represented on his map -- not to mention travelers from every state in the nation as well as most local patrons -- are drawn by the park's scenic vistas and many trails.

"We get people who come in because they are trying to see as many national parks as they can, and then we get poeple who are traveling through on the turnpike and they might need to stop for the night, and they look at a map and say, 'Hey, there's a national park here. Let's stop here,'" Charnock said.

According to the report "2016 National Park Visitor Spending Effects," communities within 60 miles of a national park shared a collective 18.4 billion in direct spending by 331 million park visitors last year.

"National park tourism is a significant driver in the national economny, returning $10 for every $1 invested in the National Park Service, and it's a big factor in our local economy as well," Cuyahoga Valley National Park Deputy Superintendent Paul Stoehr said.

Cuyahoga Valley was the 12-most visited of the 49 national parks in the United States last year, and it supported 1,085 jobs.

That figure problaby doesn't include the adolescent granddaughters of Sandi Saffles, who often don red aprons to help out at the family's Yum Yum Sweet Shop on Peninsula' Main Stree.

Saffls opened the venture two years ago with her son and daughter-in-law, Keith and Amber Saffles. They sell more than 2,500 kinds of candy, chocolate, crafted sodas and ice cream, about a block from the Cuyahoga Valley Scenic Railroad depot.

"My customers either come in on the train, they come by bike, they hike, they run," she said. "We are surrounded by the park, and it brings them here."

Staff writer Rick Armon contributed to this report. Paul Schleis can be reached at 330-996-3741 or pschleis@thebeaconjournal.com. Follower her on Twitter at http://twitter.com/paulaschleis.