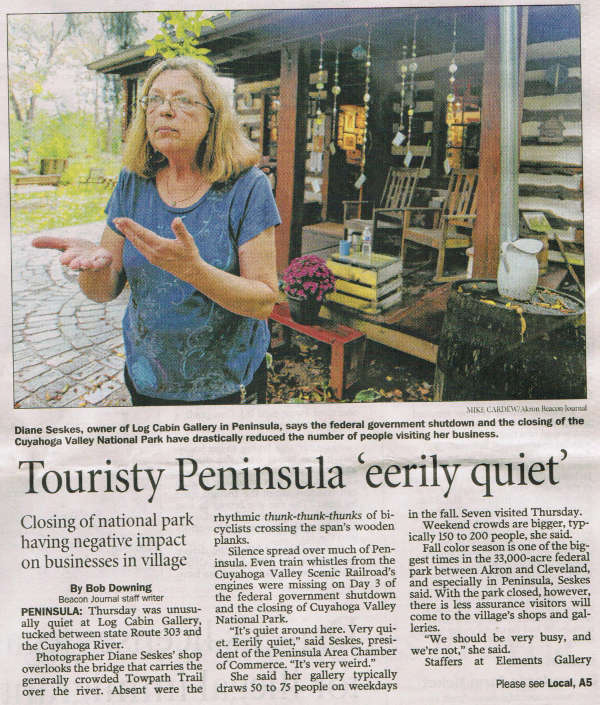 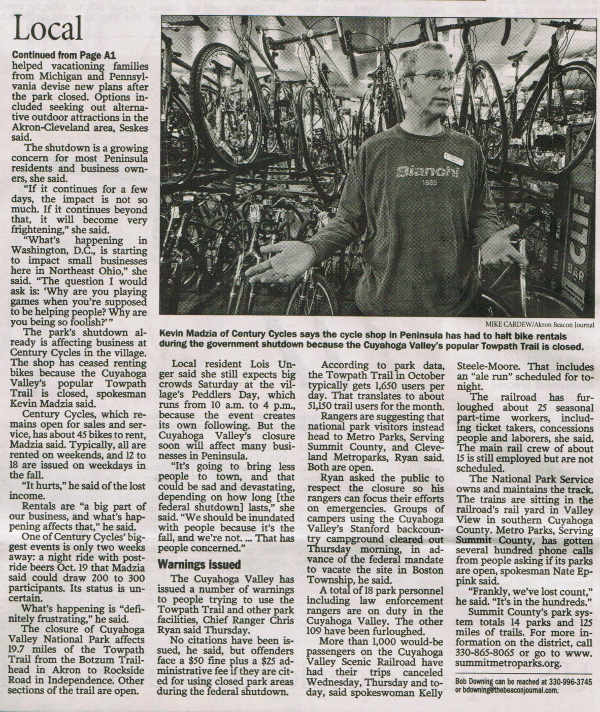 Closing of national park having negative impact on businesses in village

Photographer Diane Seskes' shop overlooks the bridge that carries the generally crowded Towpath Trail over the river. Absent were the rhythmic thunk-thunk-thunks of bicyclists crossing the span's wooden planks.

Silence spread over much of Peninsula. Even train whistles from the Cuyahoga Valley Scenic Railroad's engines were missing on Day 3 of the federal government shutdown and the closing of Cuyahoga Valley National Park.

She said her gallery typically draws 50 to 75 people on weekdays in the fall. Seven visited Thursday.

Weekend crowds are bigger, typically 150 to 200 people, she said.

Fall color season is one of the biggest times in the 33,000-acre federal park between Akron and Cleveland, and especially in Peninsula, Seskes said. With the park closed, however, there is less assurance visitors will come to the village's shops and galleries.

"We should be very busy, and we're not," she said.

The shutdown is a growing concern for most Peninsula residents and business owners, she said.

"What's happening in Washington, D.C., is staring to impact small businesses here in Northeast Ohio," she said. "The question I would ask is: 'Why are you playing games when you're supposed to be helping people? Why are you being so foolish?'"

The park's shutdown already is affecting business at Century Cycles in the village. The shop has ceased renting bikes because the Cuyahoga Valley's popular Towpath Trail is closed, spokesman Kevin Madzia said.

Century Cycles, which remains open for sales and service, has about 45 bikes to rent, Madzia said. Typically, all are rented on weekends, and 12 to 18 ar issued on weekdays in the fall.

"It hurts," he said of the lost income.

Rentals are "a big part of our business, and what's happening affects that," he said.

One of Century Cycles' biggest events is only two weeks away: a night ride with post-ride beers Oct. 19 that Madzia said could draw 200 to 300 participants. Its status is uncertain.

The closure of Cuyahoga Valley National Park affects 19.7 miles of the Towpath Trail from the Botzum Trailhead in Akron to Rockside Road in Independence. Other sections of the trail are open.

Local resident Lois Unger said she still expects big crowds this Saturday at the village's Peddlers Day, which runs from 10 a.m. to 4 p.m., because the event creates its own following. But the Cuyahoga Valley's closure soon will affect many businesses in Peninsula.

"It's going to bring less people to town, and that could be sad and devastating, depeding on how long [the federal shutdown] lasts," she said. "We should be inundated with people because it's the fall, and we're not. ... That has people concerned.

The Cuyahoga Valley has issued a number of warnings to people trying to use the Towpath Trail and other park facilities, Chief Ranger Chris Ryan said Thursday.

No citations have been issued, he said, but offenders face a $50 fine plus a $25 administrative fee if they are cited for using closed park areas during the federal shutdown.

According to park data, the Towpath Trail in October typically gets 1,650 users per day. That translates to about 51,150 users for the month.

Rangers are suggesting that national park visitors instead head to Metro Parks, Serving Summit County, and Cleveland Metroparks, Ryan said. Both are open.

Ruan asked the public to respect the closure so his rangers can focus their efforts on emergencies. Groups of campers using the Cuyahoga Valley's Stanford backcountry campground cleared out Thursday morning, in advance of the federal mandate to vacate the site in Boston Township, he said.

A total of 18 park personnel including law enforcement rangers are on duty in the Cuyahoga Valley. The other 109 have been furloughed.

More than 1,000 would-be passengers on the Cuyahoga Valley Scenic Railroad have had their trips canceled Wednesday, Thursday and today, said spokeswoman Kelly Steele-Moore. That includs an "ale run" scheduled for tonight.

The railroad has furloughed about 25 seasonal part-time workers, including ticket takers, concessions people and laborers, she said. The main rail crew of about 15 is still employed but are not scheduled.

Summit County's park system totals 14 parks and 125 miles of trails. For more information on the district, call 330-865-8065 or go to www.summitmetroparks.org.