The village of Peninsula, home to one of Century Cycles' stores, was named one of Ohio's Best Hometowns by Ohio Magazine. The Akron Beacon Journal talked to local residents for this article, including Century Cycles' Sales Manager in Peninsula, Doug Charnock. 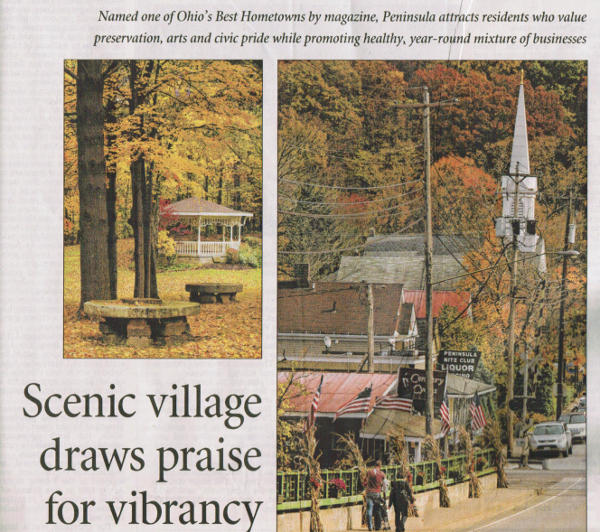 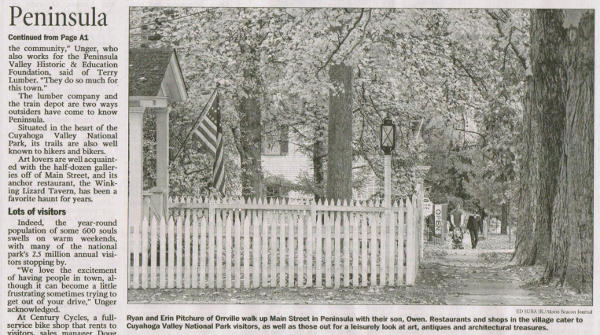 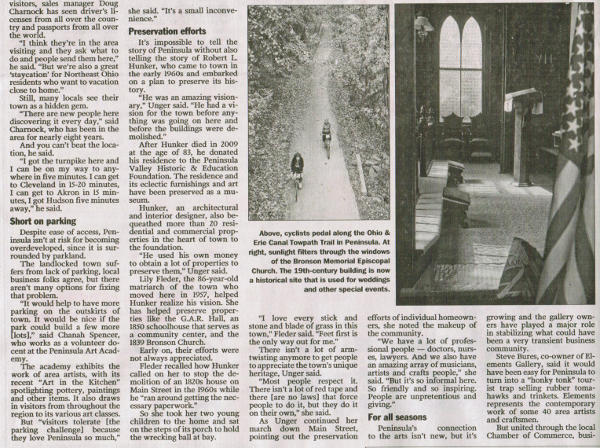 PENINSULA: Lois Unger stands at the edge of a hundred-foot cliff looking down at the rushing water of the Cuyahoga River. Yellow, red and orange leaves cling to the trees and sprinkle the banks like confetti.

"Isn't it beautiful?" The longtime Peninsula resident says for at least the fifth time during a stroll that has only covered two blocks.

Arguably, it's hard to find a spot in this tiny, picturesque village where those words would not be appropriate.

The scenic views, green spaces, shops and restaurants, lively arts scene, civic pride and family-friendly events are among the reasons Ohio Magazine is recognizing Peninsula as one of five communities in its annual Ohio's Best Hometowns November issue.

But ask the locals the top reason their town is special, and one thing rises to the top: the people.

Talk to John Lahoski about Terry Lumber & Supply Co., started by his grandfather in 1943, and the first story he's eager to share is how the town turned out to help the business recover from a devastating flood in 2003.

"The flood almost put us out of business, but we had 70 volunteers that come down here and they cleaned, stacked lumber, they did whatever they could to help out," Lahoski said.

It's a mutual love affair.

Each year, Terry Lumber is turned into the North Pole, with hundreds of elves greeting the Polar Express trains that bring youngsters into Peninsula during the storybook event. The train depot for the Cuyahoga Valley Scenic Railroad is a stone's throw from the lumberyard.

"They're the heartbeat of the community," Unger, who also works for the Peninsula Valley Historic & Education Foundation, said of Terry Lumber. "They do so much for this town."

The lumber company and the train depot are two ways outsiders have come to know Peninsula.

Situated in the heart of the Cuyahoga Valley Nation Park, its trails are also well known to hikers and bikers.

Art lovers are well acquainted with the half-dozen galleries off of Main Street, and its anchor restaurant, the Winking Lizard Tavern, has been a favorite haunt for years.

Indeed, the year-round population of some 600 souls swells on warm weekends, with many of the national park's 2.5 million annual visitors stopping by.

"We love the excitement of having people in town, although it can become a little frustrating sometimes trying to get out of your drive," Unger acknowledged.

"I think they're in the area visiting and they ask what to do and people send them here," he said. "But we're also a great 'staycation' for Northeast Ohio residents who want to vacation close to home."

Still, many locals see their town as a hidden gem.

"There are new people here discovering it every day," said Charnock, who has been in the area for nearly eight years.

And you can't beat the location, he said.

Despite ease of access, Peninsula isn't at risk for becoming overdeveloped, since it is surrounded by parkland.

The landlocked town suffers from lack of parking, local business folks agree, but there aren't many options for fixing that problem.

"It would help to have more parking on the outskirts of town. It would be nice if the park could build a few more [lots]," said Chanah Spencer, who works as a volunteer docent at the Peninsula Art Academy.

The academy exhibits the work of area artista, with its recent "Art in the Kitchen" spotlighting pottery, paintings and other items. It also draws in visitors from throughout the region to its various art classes.

But "visitors tolerate [the parking challenge] because they love Peninsula so much," she said. "It's a small inconvenience."

It's impossible to tell the story of Peninsula without also telling the story of Robert L. Hunker, who came to town in the early 1960s and embarked on a plan to preserve its history.

"He was an amazing visionary," Unger said. "He had a vision for the town before anything was going on here and before the buildings were demolished."

After Hunker died in 2009 at the age of 83, he donated his residence to the Peninsula Valley Historic & Education Foundation. The residence and its eclectic furnishings and art have been preserved as a museum.

Hunker, and architectural and interior designer, also bequeathed more than 20 residential and commercial properties in the heart of town to the foundation.

"He used his own money to obtain a lot of properties to preserve them," Unger said.

Lily Fleder, the 86-year-old matriarch of the town who moved here in 1957, helped Hunker realize his vision. She has helped preserve properties like the G.A.R. Hall, an 1850 schoolhouse that serves as a community center, and the 1839 Bronson Church.

Early on, their efforts were not always appreciated.

Fleder recalled how Hunker called on her to stop the demolition of an 1820s house on Main Street in the 1960s while he "ran around getting the necessary paperwork."

So she took her two young children to the home and sat on the steps of its porch to hold the wrecking ball at bay.

"I love every stick and stone and blade of grass in this town," Fleder said. "Feet first is the only way out for me."

There isn't a lot of arm-twisting anymore to get people to appreciate the town's unique heritage, Unger said.

"Most people respect it. There isn't a lot of red tape and there [are no laws] that force people to do it, but they do it on their own," she said.

As Unger continued her march down Main Street, point out the preservation efforts of individual homeowners, she noted the makeup of the community.

"We have a lot of professional people -- doctors, nurses, lawyers. And we also have an amazing array of musicians, artists and crafts people," she said. "But it's so informal here. So friendly and so inspiring. People are unpretentious and giving."

Peninsula's connection to the arts isn't new, but it's growing and the gallery owners have played a major role in stabilizing what could have been a very transient business community.

Steve Bures, co-owner of Elements Gallery, said it would have been easy for Peninsula to turn into a "honky tonk" tourist trap selling rubber tomahawks and trinkets. Elements represents the contemporary work of some 40 area artists and craftsmen.

But united through the local Chamber of Commerce, business owners strived to create year-round operations not just dependent on seasonal traffic.

"In the first five year we were her, 12 businesses came and went," Bures said of the central business district.

"Now when you come in, you feel part of a community. You're still welcome even if you didn't originate here," he said. "And the economic base is less transient. We worked really hard in the last 15 years to build a quality economic base here."

The fast that most of them survived the Great Recession is evidence that the recipe is working, he said.

A place to live

He also takes pride that the business sector has done well without sacrificing the residential properties that intermingle with them.

"We wanted to protect the people who lived here and their families. To destroy that and turn houses into shops would be a mistake," Bures said.

Nurturing that residential base pays off in many ways.

Earlier this month, a public fundraising event helped get within $20,000 of the $85,000 needed to put a new slate roof on the Boston Township town hall. The township, population 1,400, border the village on three sides, and the two communities usually think of themselves as one.

Residents also came together when the United Methodist Church needed its steeple renovated.

"It didn't matter what congregation you're from," Unger said. "People of all faiths came together to help fix it."

In the warm months, volunteers even schedule themselves daily to water the planters that line the Main Street bridge.

"You'll see someone park their car and drag jugs of water out of their trunk," Unger said. "It's a lot of work but they do it every day. That's just the kind of town it is."

The November issue of Ohio Magazine also named Findlay, Gallipolis, Greenville and Grove City as Best Hometowns for 2013. Each community will also be featured in the January and July issues, showing readers unique places to visit and ways to enjoy each location.

The magazine's online version is at http://www.ohiomagazine.com, although the new hometown edition was not available as of Sunday evening.