From the Akron Beacon-Journal: 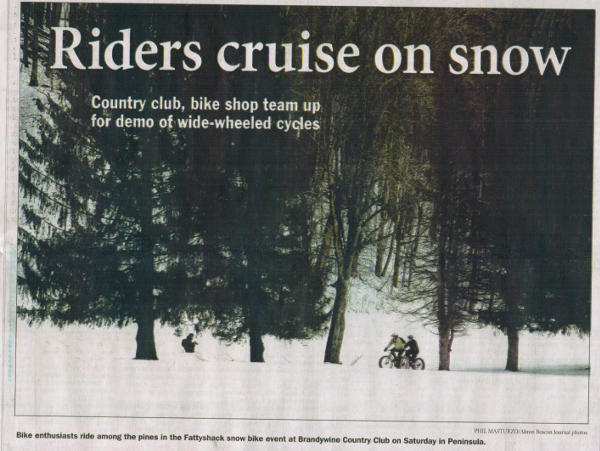 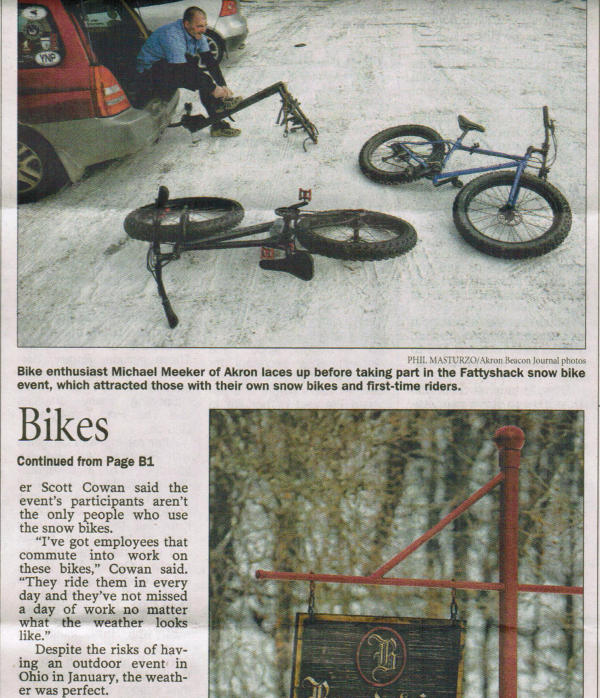 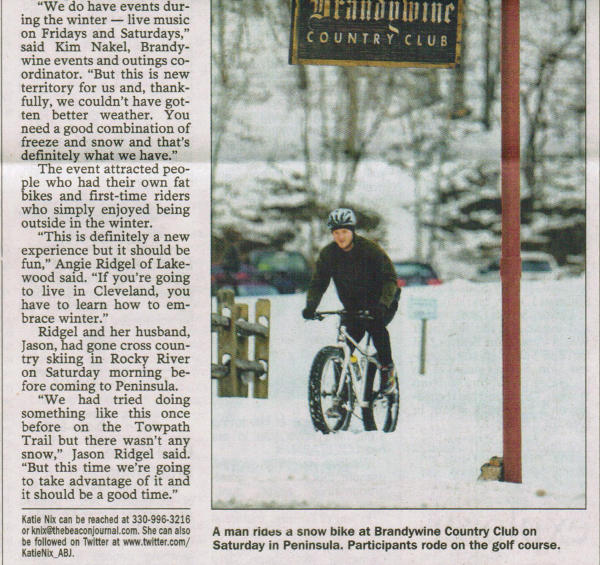 While most golf courses are not utilized during the winter months, the Brandywine Country Club paired with Century Cycles of Peninsula to put the 18-hole course to good use Saturday.

The "Fattyshack" event allowed participants to use snow bikes, also known as "fat bikes" because of their wide wheels, to ride on the country club's golf course.

"The fat bikes are basically the same as a regular mountain bike," Doug Charnock, store manager of the Peninsula Century Cycles, said. "However, the frames are a bit wider to accomodate the wheels. But they're lighter than a regular bike to be able to handle the different kind of terrain."

Century Cycles provided the fat bikes for participants for free but they had to sign a waiver before entering the golf course. Two trails were offered -- a calm, easy one on the front nine holes for beginners and a course with more hills on the back nine for advanced riders.

Whether participants brought their own bikes or borrowed one from Century, Charnock said they needed to realize the fat bikes ride differently from regular bikes.

"There's a lower tire pressure in these bikes," Charnock said. "It just means you have to pay more attention to how you're balancing the bike and it requires a little more effort to pedal."

Century Cycles owner Scott Cowan said the event's participants aren't the only people who use the snow bikes.

"I've got employees that commute into work on these bikes," Cowan said. "They ride them in every day and they have not missed a day of work no matter what the weather looks like."

Despite the risks of having an outdoor event in Ohio in January, the weather was perfect.

"We do have events during the winter -- live music on Fridays and Saturdays," said Kim Nakel, Brandywine events and outings coordinator. "But this is new territory for us and, thankfully, we couldn't have gotten better weather. You need a good combination of freeze and snow and that's definitely what we have."

The event attracted people who had their own fat bikes and first-time riders who simply enjoyed being outside in the winter.

"This is definitely a new experience but it should be fun," Angie Ridgel of Lakewood said. "If you're going to live in Cleveland, you have to learn how to embrace winter."

Ridgel and her husband, Jason, had gone cross country skiing in Rocky River on Saturday morning before coming to Peninsula.

"We had tried doing something like this once on the Towpath Trail but there wasn't any snow," Jason Ridgel said. "But this time we're going to take advantage of it and it should be a good time."

Katie Nix can be reached at 330-996-3216 or nix@thebeaconjournal.com. She can also be followed on Twitter at www.twitter.com/KatieNix_ABJ.