Thanks to staff writer Jim Carney and photographer Ed Suba Jr. of the Akron Beacon Journal for joining us for our Snow Biking Clinic on February 9, 2013 in Peninsula. See below for the newspaper article and photos, or view them on the Beacon Journal site. 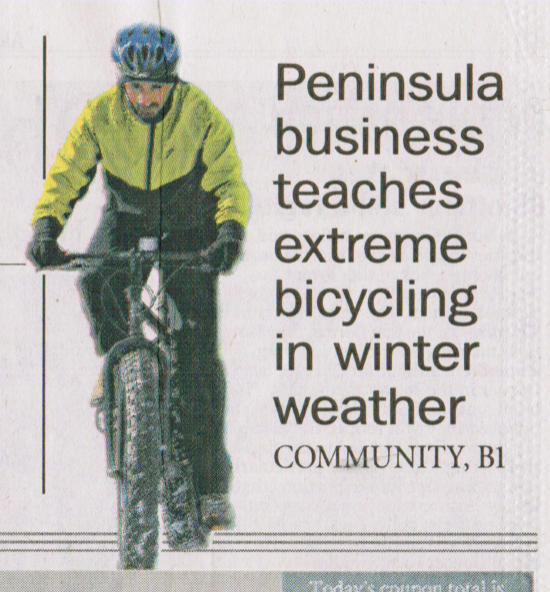 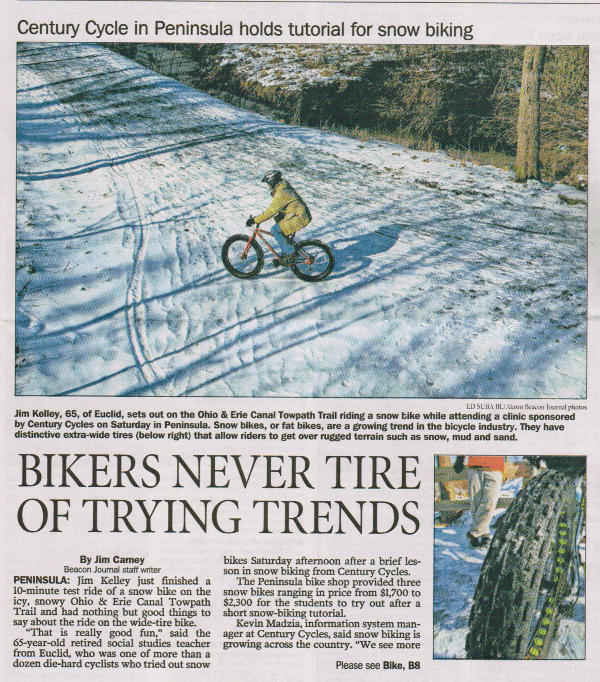 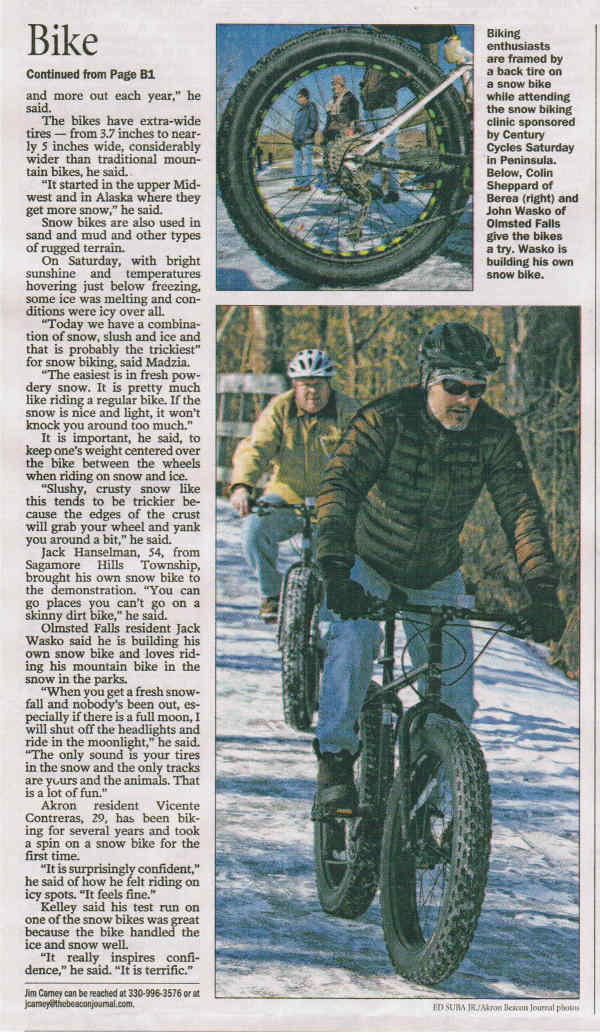 PENINSULA: Jim Kelley just finished a 10-minute test ride of a snow bike on the icy, snowy Ohio & Erie Canal Towpath Trail and had nothing but good things to say about the ride on the wide-tire bike.

"That is really good fun," said the 65-year-old retired social studies teacher from Euclid, who was one of more than a dozen die-hard cyclists who tried out snow bikes Saturday afternoon after a brief lesson in snow biking from Century Cycles.

The Peninsula bike shop provided three snow bikes ranging in price from $1,700 to $2,300 for the students to try out after a short snow-biking tutorial.

Kevin Madzia, information system manager at Century Cycles, said snow biking is growing across the country. "We see more and more out each year," he said.

The bikes have extra-wide tires -- from 3.7 inches to nearly 5 inches wide, considerably wider than traditional mountain bikes, he said.

"It started in the upper Midwest and in Alaska where they get more snow," he said.

Snow bikes are also used in sand and mud and other types of rugged terrain.

On Saturday, with bright sunshine and temperatures hovering just below freezing, some ice was melting and conditions were icy over all.

"Today we have a combination of snow, slush and ice and that is probably the trickiest" for snow biking, said Madzia.

"The easiest is in fresh powdery snow. It is pretty much like riding a regular bike. If the snow is nice and light, it won't knock you around too much."

It is important, he said, to keep one's weight centered over the bike between the wheels when riding on snow and ice.

"Slushy, crusty snow like this tends to be trickier because the edges of the crust will grab your wheel and yank you around a bit," he said.

Jack Hanselman, 54, from Sagamore Hills Township, brought his own snow bike to the demonstration. "You can go places you can't go on a skinny dirt bike," he said.

Olmsted Falls resident Jack Wasko said he is building his own snow bike and loves riding his mountain bike in the snow in the parks.

"When you get a fresh snowfall and nobody's been out, especially if there is a full moon, I will shut off the headlights and ride in the moonlight," he said. "The only sound is your tires in the snow and the only tracks are yours and the animals. That is a lot of fun."

Akron resident Vicente Contreras, 29, has been biking for several years and took a spin on a snow bike for the first time.

"It is surprisingly confident," he said of how he felt riding on icy spots. "It feels fine."

Kelley said his test run on one of the snow bikes was great because the bike handled the ice and snow well.

"It really inspires confidece," he said. "It is terrific."