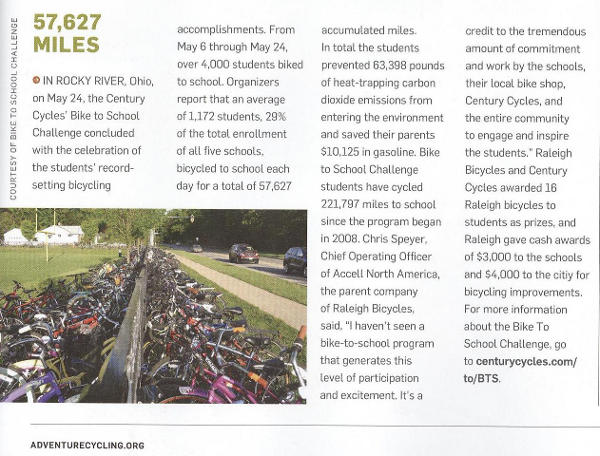 IN ROCKY RIVER, Ohio, on May 24, the Century Cycles' Bike to School Challenge concluded with the celebration of the students' record-setting bicycling accomplishments. From May 6 through May 24, over 4,000 students biked to school. Organizer report that an average of 1,172 students, 29% of the total enrollment of all five schools, bicycled to school each day for a total of 57,627 accumulated miles. In total the students prevented 63,398 pounds of heat-trapping carbon dioxide emissions from entering the environment and saving their parents $10,125 in gasoline. Bike to School Challenge students have cycled 221,797 miles to school since the program began in 2008. Chris Speyer, Cheif Operating Officer of Accell America, the parent company of Raleigh Bicycles, said, "I haven't seen a bike-to-school program that generates this level of participation and excitement. It's a credit to the tremendous amount of commitment and work by the schools, their local bike shop, Century Cycles, and the entire community to engage and inspire the students." Raleigh Bicycle and Century Cycles awarded 16 Raleigh bicycle to students as prizes, and Raleigh gave cash awards of $3,000 to the school and $4,000 to the city for bicycling improvements. For more information about the Bike To School Challenge, go to centurycycles.com/to/BTS.