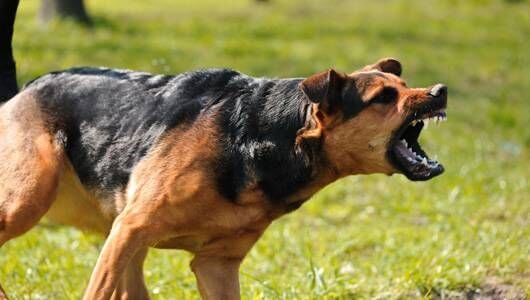 By Fred Matheny and Ed Pavelka

Dog attacks are high on the list of cycling fears. Maybe you can’t stop Fang from giving chase, but you can outsmart him if you know how dogs think — assuming that stinkin’ mutt even has a brain!

Know dog psychology. The majority of dogs who chase cyclists are merely defending their territory. When you pedal off the section of road that they consider their turf, you no longer pose a threat to their ancestral instincts and they lose interest. Incidentally, this is why you’ll rarely be chased by a dog you encounter way out in the boonies. He’s not on his turf so he couldn’t care less about you.

Know dog tactics. Dogs want to attack from the rear, coming up from the hindquarter. Even one who sits up in his yard ahead of you may wait till you pass before giving chase. You can use this to your advantage in the next tip because it gives you a head start.

Sprint! You often can outsprint Fido when he’s more interested in fooling around than in actually attacking. You can tell his intent by how hard he’s running and his expression. An easy gait with woofing and ears and tail up, no problem. A full-out sprint with ears back, tail down and teeth out, problem. Still, the territorial gene can save you. If the road is flat or downhill, stand up and sprint to get past the dog’s invisible boundary.

Guard your front wheel. When a dog sees you coming, he might make a beeline for your bike, then attempt to turn up beside you. The danger here is that his poor little paws will skid on the pavement and he’ll plow into your wheels. If he hits the front one, you’ll crash. Sprint so that you move forward faster than he expects, and give him a margin for error by steering farther into the road — if traffic permits!

SCREAM! Most dogs know what happens when a human is angry with them. A sudden shout of “No!” or “Git!” or “Stay!” will surprise Fluffy and probably make him hesitate for just the second you need to take the advantage. If he’s hard of hearing, raise your hand threateningly as if it contains a rock. Outlaw mutts usually have had experience with bad things flying at them when a human makes a throwing gesture.

Play douse the Doberman. If you see big, fast Prince up ahead and know that he sees you, sprinting might not work. Especially if the road is tilting up. Take out your water bottle. Just having it in your hand may make him stay away. If he does come near you, give him a faceful and a loud yell. This distraction will slow him down, though he may come back for more. Just don’t distract yourself and ride off the road.

Some riders swear by "Halt" pepper spray that they clip to their handlebar. This stuff works great — if you hit your target. That’s a big if when you and Spot are going different speeds, the air is moving, and you’re trying to stay on the road. Pepper spray stings a dog’s eyes, nose and mouth, but it doesn’t cause lasting damage. It also works on human attackers, but that’s a different story.

Give up and get off.  If nothing works and Toodles has the upper hand, dismount quickly and hold your bike between you and those sharp teeth. Swing it like a weapon if necessary, and start calling for help. Someone may eventually come out of a house and yell, “Oh, he won’t hurt you!”

Call the cops. If you are attacked and bitten, report it to the county sheriff or other authority immediately. Include the location, a description of the dog and the owner’s name and address if you know them. Get medical attention without delay. If the dog was rabid, you are at risk of serious illness or even death. Demand proof of rabies vaccination or insist to authorities that the dog be quarantined.

If the same dog accosts you every time you ride the road, report this to the authorities, too. You have a right to life, liberty, pursuit of cycling happiness and public roadway access free from fear of fanged attack. Keep following up with calls to make sure steps are taken to put PupPup on a rope.

This article is provided courtesy of RoadBikeRider.com and was written by its founders Fred Matheny and Ed Pavelka. Fred and Ed were longtime Bicycling Magazine editors, are noted cycling authors, and rode together on a world-record-setting Race Across America team in 1996.