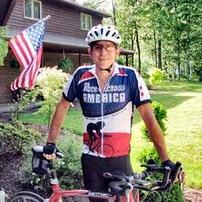 Mike McClintock, 52, rode his first mountain bike race at the age of 38 with a baby seat still attached to his bike. The electrical company owner came in second at that race at Vulture's Knob and has been riding hard for 14 years ever since. But no ride will be as hard as the one he started on Wednesday, June 15, 2011.

The Race Across America (RAAM) is billed as "the world's toughest bicycle race" -- an ultra-cycling event that's over 3,000 miles long (from Oceanside CA to Annapolis MD) and that must be finished within the 12 days allotted. What makes it even harder for Mike? The father of three is riding as a solo competitor, biking all those miles by himself and banned from riding in packs or drafting.

There were only 12 racers in Mike's division, Solo Men 50-59. As the RAAM website puts it, the solos are the stars of RAAM. Mike plans to average 260 miles of bicycling (20+ hours) per day to reach his goal and finish RAAM in 11 days. Only about half of all RAAM competitors finish the race; in the 30 years RAAM has been held, less than 200 solo racers have completed it.

Century Cycles is honored to be one of Mike McClintock's RAAM sponsors and is proud that Tom Wiseman, Assistant Service Manager in our Medina store, was on his crew.

"I admit I'm nervous," said Tom before the race. Tom competed in the Fireweed 400 (a.k.a. The Great Alaskan Double Century) with Mike back in 2007, where they came in first in the men's duo category. "Historically, most of the time penalties in RAAM are for crew mistakes, not rider mistakes. There is no room for error. But Mike is ready. I've known him for 15 years and he's in his best shape ever."

Mike rode RAAM on his 2005 Specialized Tarmac that, as Tom puts it, "he has a real good relationship with." In the final days leading up to the race, Mike tapered in his training, riding just 1.5 hours per day, but at his height was averaging over 550 miles of riding per week and went through 5 chains in just a few months. 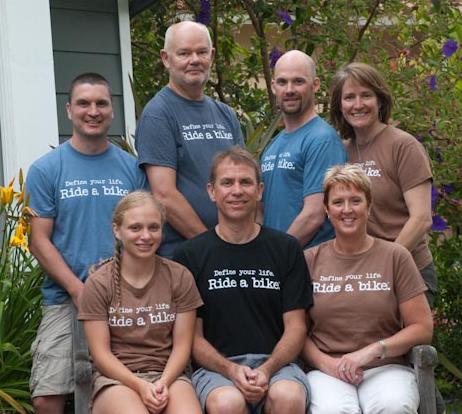 It may take a village to raise a child, but it also takes one to support a RAAM rider. McClintock Race Team secured parts and equipment from Century Cycles, Avenir, and Pearl Izumi to aid their quest. They received a PA system from Alstage Sound and Lighting for communication with Mike during the ride. Crew Chief Bob Haugh and the rest of the crew -- including Mike's wife Robyn -- studied the RAAM rules from top to bottom to make sure they didn't miss a thing.

Upon Mike's return, we hope to hold an event at our Medina store with Mike, to hear all about his RAAM experience and to learn how we, too, can take our cycling from ordinary to extraordinary -- whether it's adding 10 more miles to our ride or 100 or, well, 3,000! In the meantime, you can click here to hear Mike interviewed on Radio Century Cycles back in April.

For more information about Mike and how you can help the charity he's riding for, Central American Medical Outreach, go to the McClintock Race Team website. 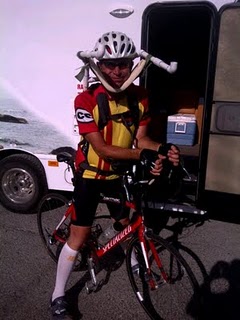 Mike McClintock dropped out of the Race Across America on Friday, June 24 in Bloomington, Indiana -- his experience cut short on Day 9 by an excruciating case of Shermer's Neck that plagued him for most of the race and that got the better of the neck brace built for him by Tom Wiseman.

To all of my friends, family and supporters I regretfully announce that I am calling an official end to my race. 2263 miles and nine days after I started I had to concede that it would physically be impossible for me to complete in the remaining allotted time. Too many injuries that consumed precious hours ultimately proved to be my ...undoing. By far the most crippling was a condition known as "Shermers Neck." This is a condition that afflicts the muscles that support your head and is very prevalent in the ultra-cycling community. There are various neck braces that can be used but none are designed for the rigors of a race such as RAAM. Ultimately, crew chief Bob Haugh and crew member Tom Wiseman devised a system that allowed me to hold my head up for the last 1500 miles of my attempt!

Alaskan adventurer and explorer Norm Vaughn once said "Dream big and dare to fail." Did I fail? In one respect: yes. My dream was to race the entire 3000 mile course within 12 days and have an official finish. I did not realize that dream. However, the hours spent in preparation for the race, the relationships built with my crew members and the heightened awareness of Central American Medical Outreach (CAMO) have yielded so many positives that to call it a failure would be an injustice.

And yes, on a personal and spiritual level I have grown as well. I re-learned that I am a blessed person with a truly exceptional wife. I also re-learned that no matter what or where there is NEVER a time that you are truly alone. Evidence of God's presence was manifested many times over as I raced across the country. When I really needed Him, He was there.

To everyone who has been with me through your support and prayers I thank you from the bottom of my heart.