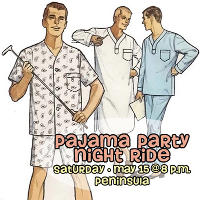 The ride began at 8pm, with 140 pajama-clad cyclists taking to the trail! At the Botzum Trailhead turn-around point, riders were treated to slumber party snacks (popcorn, animal crackers, Twizzlers, and pop), and games of Spin the Water Bottle for Cycling Truth or Dare! Most of the group gathered in the Winking Lizard's party room after the ride for food and beverages.