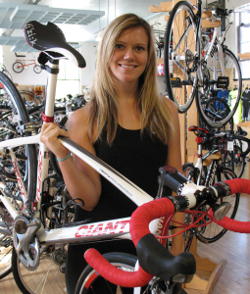 In late August of 2010, the Cleveland cycling community was disheartened to learn that Katie Spotz, the Mentor, Ohio native who has become an international celebrity for her athletic and philanthropic achievements, was the victim of a robbery. Katie's 2000 Dodge minivan was stolen from a Cleveland parking lot. The van was recovered by police a week later, but the loss of the contents was even greater. 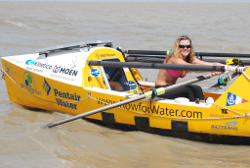 Inside the van was her Giant OCR Composite 2 bicycle, which she purchased from Century Cycles back in 2006 and used on a cross-country ride to honor her grandmother who had recently passed away, and raise awareness for lung disease. Also in the van were a custom made set of oars worth $2000, which Katie used in early 2010 for a record-setting solo row across the Atlantic Ocean to raise money and awareness for clean water projects around the world. 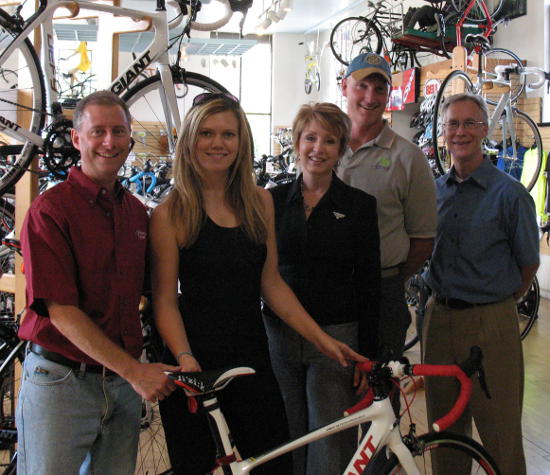 After hearing about Katie's unfortunate situation, Century Cycles, the Chagrin Valley Rotary Club, and Giant Bicycles teamed up to donate a bicycle to Katie that will be worthy of her next adventure! At our Rocky River store on Sept. 15, 2010, Katie was presented with a brand new 2011 Giant Defy Advanced 1 bicycle!

You can follow Katie Spotz on Facebook to learn about her next adventure on her new bicycle (which she has nicknamed Phoenix)!

Link to this page with this url: www.centurycycles.com/for/KatieSpotz