A Victory for Adam Craig of Giant Bicycles 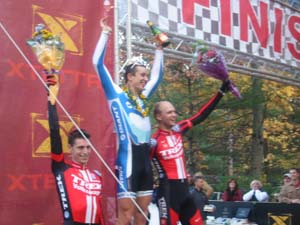 Mountain biker Adam Craig of the Giant Bicycles cycling team set a course record to take first place in the Men's Pro division at the 16th Annual Xterra Iceman Cometh Challenge in Traverse City, Michigan on November 5, 2005. Adam rode to victory on the Giant Anthem 1 mountain bike. With the fast, dry course conditions this year, Adam was the first to ever finish the race in under one hour and 30 minutes. The second- and third-place Men's Pro finishers also broke the 90-minute barrier this year. See the full results.

The Iceman Cometh Challenge is a 27-mile off-road race from Kalkaska to Traverse City, Michigan, held for the past 16 years on the first Saturday of November. The field is limited to 2,000 racers, and the registration has become filled sooner and sooner every year as the event grows in popularity (the registration closed in March for the 2005 race).

Two of the Century Cycles staff made the trip to Northern Michigan to participate in the race, Doug from the Peninsula store, and Kevin from Solon.