Century Cycles' co-founder Lois Moss is featured in the October 31-November 6, 2005 edition of Crain's Cleveland Business. Lois was selected as one of the 25 "Women of Note" for 2005. 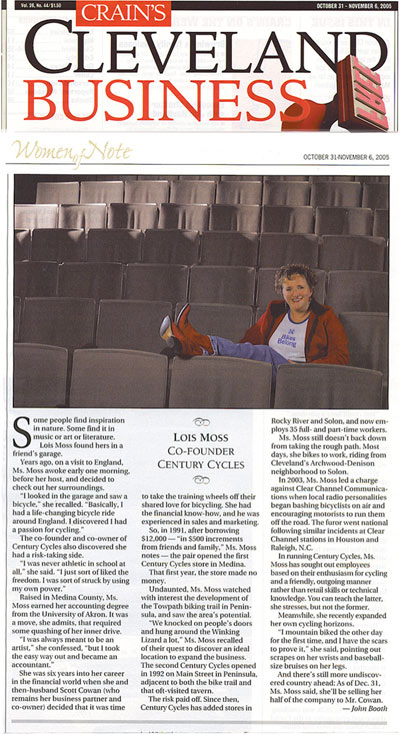 Some people find inspiration in nature. Some find it in music or art or literature.

Lois Moss found hers in a friend's garage.

Years ago, on a visit to England, Ms. Moss awoke early one morning, before her host, and decided to check out her surroundings.

'I looked in the garage and saw a bicycle,' she recalled. "Basically, I had a life-changing bicycle ride around England. I discovered I had a passion for cycling."

The co-founder and co-owner of Century Cycles also discovered she had a risk-taking side.

"I was never athletic in school at all," she said. "I just sort of liked the freedom. I was sort of struck by using my own power."

Raised in Medina County, Ms. Moss earned her accounting degree from the University of Akron. It was a move, she admits, that required some quashing of her inner drive.

"I was always meant to be an artist," she confessed, "but I took the easy way out and became an accountant."

She was six years into her career in the financial world when she and then-husband Scott Cowan (who remains her business partner and co-owner) decided that it was time to take the training wheels off their shared love for bicycling. She had the financial know-how, and he was experienced in sales and marketing.

That first year, the store made no money.

Undaunted, Ms. Moss watched with interest the development of the Towpath biking trail in Peninsula, and saw the area's potential.

"We knocked on people's doors and hung around the Winking Lizard a lot," Ms. Moss recalled of their quest to discover an ideal location to expand the business. The second Century Cycles opened in 1992 on Main Street in Peninsula, adjacent to both the bike trail and that oft-visited tavern.

The risk paid off. Since then, Century Cycles has added stores in Rocky River and Solon, and now employs 35 full- and part-time workers.

Ms. Moss still doesn't back down from taking the rough path. Most days, she bikes to work, riding from Cleveland's Archwood-Denison neighborhood to Solon.

In 2003, Ms. Moss led a charge against Clear Channel Communications when local radio personalities began bashing bicyclists on air and encouraging motorists to run them off the road. The furor went national following similar incidents at Clear Channel stations in Houston and Raleigh, N.C.

In running Century Cycles, Ms. Moss has sought out employees based on their enthusiasm for cycling and a friendly, outgoing manner rather than retail skills or technical knowledge. You can teach the latter, she stresses, but not the former.

Meanwhile, she recently expanded her own cycling horizons.

"I mountain biked the other day for the first time, and I have the scars to prove it," she said, pointing out scrapes on her wrists and baseball-size bruises on her legs.

And there's still more undiscovered country ahead: As of Dec. 31, Ms. Moss said, she'll be selling her half of the company to Mr. Cowan.