Named Ohio’s Best Ride and One of The 50 Best Rides in America by Bicycling Magazine! 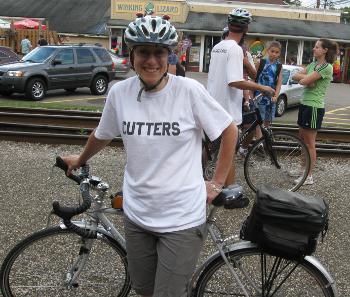 Krista McNamee, from the staff of the Century Cycles store in Rocky River, created this bike route in 2009.

The loop starts near the northern end of the Western Reserve Greenway, and follows several scenic back roads. At just under 50 miles, the ride is a nice long adventure that won't leave you too tired to enjoy a post-ride refreshment at one of the many local wineries in the area.

Most of the route is on paved trail or roads, but there are some brief unpaved sections, taking you through seven covered bridges, including the Smolen-Gulf Bridge, the longest covered bridge in the United States.

Krista's favorite restaurant on the route was Josephine's Ristorante (which, unfortunately, has since closed), which was known for the best cole slaw in the world (with pecans, pineapple, and dried cranberries). There are a few other restaurants near the main square in Jefferson. Otherwise, though, services along the route are relatively few and far between, so pack some extra snacks to fuel up mid-ride, and be prepared to take "stealth" restroom breaks.

This is a route that Krista personally rides, and it does not have trail markers specifically denoting it on the road. We recommends that you use the RideSpot app to follow the route. This ride is on a combination of paved, gravel and dirt roads, so make sure the bike you ride is good on all those surfaces.

The starting point is at the Western Reserve Greenway parking area in the village of Austinburg. From the Cleveland area, take I-90 East to Exit 223, turn right onto State Route 45 South, turn left onto State Rotue 307 East, then turn left into the trail parking lot just past Mill Street.

Not up for Krista’s 46-mile ride? Then simply head to the start of the ride and bike the Western Reserve Greenway Trail as far as you like (http://www.ashtabulacountymetroparks.org/trail.htm), then pack up your bike and stop at some covered bridges and wineries in your car. 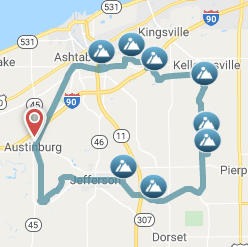