From the May 1, 2018 edition of the Westlake Bay Village Observer: 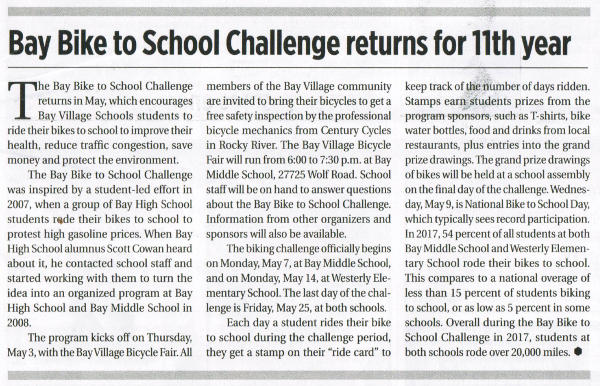 The Bay Bike to School Challenge returns in May, which encourages Bay Village Schools students to ride their bikes to school to improve their health, reduce traffic congestion, save money and protect the environment.

The Bay Bike to School Challenge was inspired by a student-led effort in 2007, when a group of Bay High School students rode their bikes to school to protest high gasoline prices. When Bay High School alumnus Scott Cowan heard about it, he contacted school staff and started working with them to turn the idea into an organized program at Bay High School and Bay Middle School in 2008.

The program kicks off on Thursday, May 3, with the Bay Village Bicycle Fair. All members of the Bay Village community are invited to bring their bicycles to get a free safety inspection by the professional bicycle mechanics from Century Cycles in Rocky River. The Bay Village Bicycle Fair will run from 6:00 to 7:30 p.m. at Bay Middle School, 27725 Wolf Road. School staff will be on hand to answer questions about the Bay Bike to School Challenge. Information from other organizers and sponsors will also be available.

The biking challenge officially begins on Monday, May 7, at Bay Middle School, and on Monday, may 14, at Westerly Elementary School. The last day of the challenge is Friday, May 15, at both schools.

Each day student rides their bike to school during the challenge period, they get a stamp on their "ride card" to keep track of the number of days ridden. Stamps earn students prizes from the program sponsors, such as T-shirts, bike water bottles, food and drinks from local restaurants, plus entries into the grand prize drawings. The grand prize drawings of bikes will be held at a school assembly on the final day of the challenge. Wednesday, May 9, is National Bike to School Day, which typically see record participation. In 2017, 54 percent of all students at both Bay Middle School and Westerly Elementary School rode their bikes to school. This compares to a national average of less than 15 percent of students biking to school, or as low as 5 percent in some schools. Overall during the Bay Bike to School Challenge in 2017, students at both schools roder over 20,000 miles.