Our "Crazy Christmas Sweater Saturdays" promotion for the 2009 holiday season got this attention from the December 17, 2009 edition of the West Shore Sun: 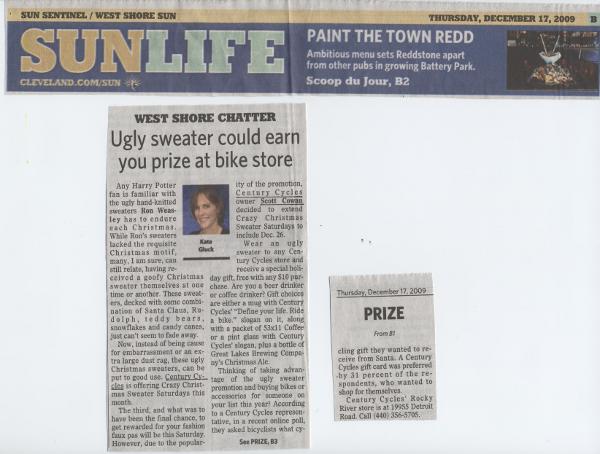 Ugly sweater could earn you prize at bike store

Any Harry Patter fan is familiar with the ugly hand-knitted sweaters Ron Weasley had to endure each Christmas. While Ron's sweaters lacked the requisite Christmas motif, many, I am sure, can still relate, having received a goofy Christmas sweater themselves at one time or another. These sweaters, decked with some combination of Santa Claus, Rudolph, teddy bears, snowflakes and candy canes, just can't seem to fade away.

Now, instead of being cause for embarrassment or an extra large dust rag, these ugly Christmas sweaters can be put to good use. Century Cycles is offering Crazy Christmas Sweater Saturdays this month.

The third, and what was to have been the final chance, to get rewarded for your fashion faux pas will be this Saturday. However, due to the popularity of the promotion, Century Cycles owner Scott Cowan decided to extend Crazy Christmas Sweater Saturdays to Dec. 26.

Wear an ugly sweater to any Century Cycles store and receive a special holiday gift, free with any $10 purchase. Are you a beer drinker or coffee drinker? Gift choices are either a mug with Century Cycles' "Define your life. Ride a bike." slogan on it, along with a packet of 53x11 coffee or a pint glass with Century Cycles' slogan, plus a bottle of Great Lakes Brewing Company's Christmas Ale.

Thinking of taking advantage of the ugly sweater promotion and buying bikes or accessories for someone on your list this year? According to a Century Cycles representative, in a recent online poll, they asked bicyclists what cycling gift they wanted to receive from Santa. A Century Cycles gift card was preferred by 31 percent of the respondents, who wanted to shop for themselves.