Century Cycles owner Scott Cowan was quoted in the December 23, 2009 edition of the West Shore Sun in an article about holiday wishes: 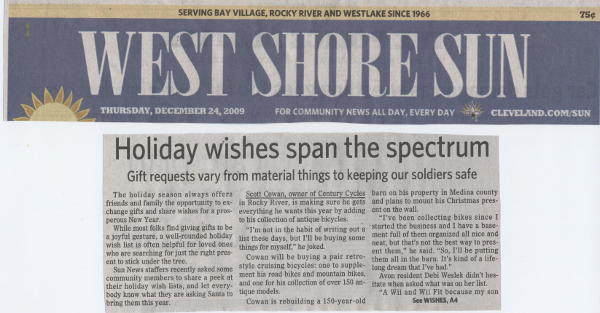 Scott Cowan, owner of Century Cycles in Rocky River, is making sure he gets everything he wants this year by adding to his collection of antique bicycles.

"I'm not in the habit of writing out a list these days, but I'll be buying some things for myself," he joked.

Cowan will be buying a pair of retro-style cruising bicycles; one to supplement his road bikes and mountain bikes, and one for his collection of over 150 antique models.

Cowan is rebuilding a 150-year-old barn on his property in Medina County and plans to mount his Christmas present on the wall.

"I've been collecting bikes since I started the business and I have a basement full of them organized all nice and neat, but that's not the best way to present them," he said. "So, I'll be putting them all in the barn. It's kind of a life-long dream that I've had."