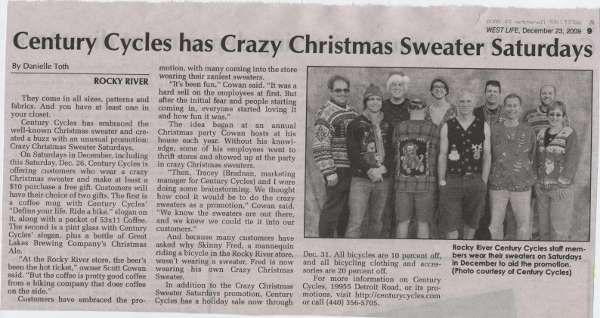 They come in all sizes, patterns, and fabrics. And you have at least one in your closet.

Century Cycles has embraced the well-known Christmas sweater and created a buzz with an unusual promotion: Crazy Christmas Sweater Saturdays.

On Saturdays in December, including this Saturday, Dec. 26, Century Cycles is offering customers who wear a crazy Christmas sweater and make at least a $10 purchase a free gift. Customers will have their choice of two gifts. The first is a coffee mug with Century Cycles' "Define your life. Ride a bike." slogan on it, along with a packet of 53x11 Coffee. The second is a pint glass with Century Cycles' slogan, plus a bottle of Great Lakes Brewing Company's Christmas Ale.

"At the Rocky River store, the beer's been the hot ticket," owner Scott Cowan said. "But the coffee is pretty good coffee from a biking company that does coffee on the side."

Customers have embraced the promotion, with many coming into the store wearing their zaniest sweaters.

"It's been fun," Cowan said. "It was a hard sell on the employees at first. But after the initial fear and people started coming in, everyone started loving it and how fun it was."

The idea began at an annual Christmas party that Cowan hosts at his house each year. Without his knowledge, some of his employees went to thrift stores and showed up at the party in crazy Christmas sweaters.

"Then, Tracey (Bradnan, marketing manager for Century Cycles) and I were doing some brainstorming. We thought how cool it would be to do the crazy sweaters as a promotion," Cowan said. "We know the sweaters are out there, and we knew we could tie it into our customers."

And because many customers have asked why Skinny Fred, a mannequin riding a bicycle in the Rocky River store, wasn't wearing a sweater, Fred is now wearing his own Crazy Christmas Sweater.

In addition to the Crazy Christmas Sweater Saturdays promotion, Century Cycles has a holiday sale now through Dec. 31. All bicycles are 10 percent off, and all bicycle clothing and accessories are 20 percent off.