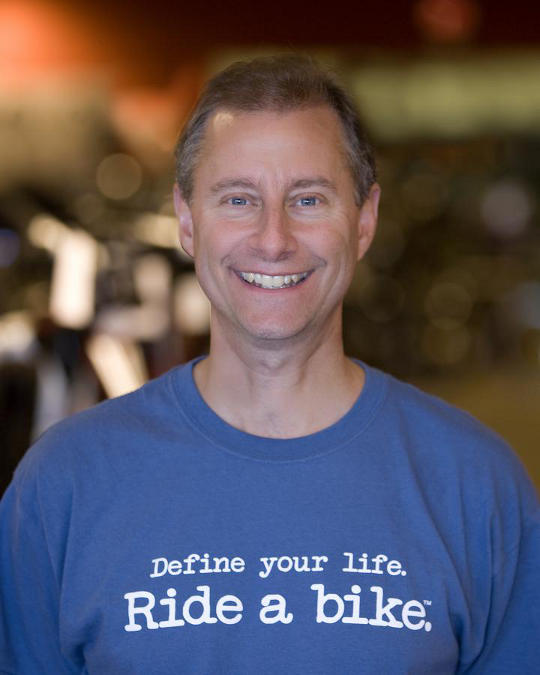 I am a lifelong resident of the greater Cleveland area, being born LONG ago at Fairview Hospital! I grew up in Bay Village where I first learned to love bikes.  Some of my fondest cycling memories are from somewhat unplanned rides with high school friends that turned into epic adventures we still talk about today! I graduated from Miami University, where I took a cycling class that had nothing to do with my Geography major, but was foreshadowing of my future.

For many years after college, I cycle-toured with my college buddy Roger. Trips included riding to Bowling Green, touring around Lake Erie, and cycling from Boston to Halifax, Nova Scotia - an 800 mile journey!

Years later, my father-in-law John and I cycled the Natchez Trace, did several long trips around Michigan (including the U.P.), Western New York, and North Carolina. I miss touring on the open road, and hope to do it again sometime soon. I am coming up on 60,000 miles ridden on the roads and trails of my adult life. That sounds like a lot, but compared to Krista, Kevin, and others, I'm still a rookie!

I have always been a people person and because of that, sales has been a big part of my life. When I was 6, I sold hot pads door-to-door made by my great aunt. I was the perennial top light bulb salesman in my Boy Scout troop. I sold French and Italian wines after college (a lot of fun)! Then there were booth spaces and beef jerky at the I-X Center...and finally bicycles.

Century Cycles was opened in the Spring of 1992 in Medina; a second store in Peninsula in the Fall of 1993; and finally in the Winter of 1997 the Rocky River store was opened. It was the busiest time of my life!

My life has settled down now, and I have been happily married since the Fall of 2014. My wife Anna and I have two awesome dogs, who we call our kids...Daisy (golden retriever) and Buddy (golden lab)...both rescue dogs. They love living out in the country of Medina County!

I have always been a "collector" of things...and soon after starting the business, I acquired my first balloon tire bicycle, and was bitten by the bug! I now have an extensive collection of bicycles with my oldest being a 1911 Colson made in Elyria. Give me a call if you have an old bike you want to talk about!

The "hobby" I most enjoy when I'm not cycling or playing volleyball is Firewood. I LOVE being in the woods cutting up deadfall trees and limbs and splitting them into firewood. I have a small "hobby business" called Honor Firewood, which keeps me out of trouble.

The program I am most proud of is our Bike to School Challenge. It is a nationally-recognized program that we started in 2008 in Bay Village, and it continues to grow each year. It has exposed thousands of students and their families to the joy and freedom of riding their bikes to school and beyond! It has transformed the communities that have embraced the Bike to School Challenge.

Back to the Meet Our Rocky River Staff page...