From The Medina County Gazette on July 8, 2007. You can read the online version of the original article here. Rady made the journey told about below on a Bianchi Volpe bicycle that he purchased from our Medina store!

Rady Takes on More Than Cancer

There are many inspiring people you meet working as a writer, but no one has struck me in my 22 months at The Gazette like Adam Rady. 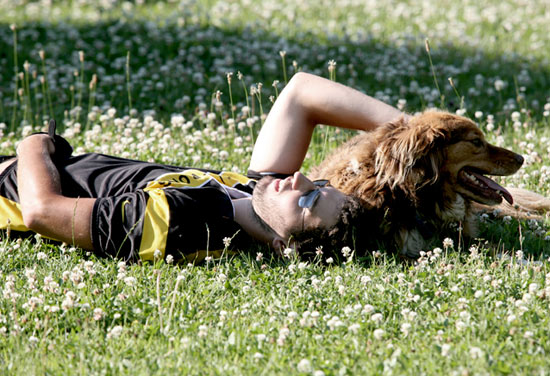 After Adam Rady arrives home Saturday evening, the first thing he did was drop to the ground and chill. The family dog 'Joe' who had missed him in the past couple of weeks, dropped down right beside him. After resting up a couple of days Adam and his dad Al will be back on the road to finish the cross country trip. (Shirley Ware, Photo Editor)

A 2003 Medina High graduate who starred on the swim team, Rady is embarking on an amazing cross-country bike trip.

His story can be found on A1 of today's Gazette, but it's the behind the scenes of his journey - spanning from Noank, Conn. to San Francisco - that gives people a better understanding of why he formed Coast 2 Coast 4 a Cure.

Partnering with The Lance Armstrong Foundation, Rady is raising money for cancer research in memory of his Aunt, Patsy Turner, who passed away from lung and brain cancer last September.

"I was in the middle of some woods and I had no idea where the hills were coming."

What has been the biggest obstacle is sleep. Rady has usually slept in a pop-up tent - a gift from a neighbor - at random campgrounds. When times are desperate, he's stayed in a cheap hotel, but only "a handful of times."

With his father, Al, following him in the family van, the pair has met some ultra-kind strangers who have helped them, including a man in New Jersey.

"We were in a restaurant and on the menu it said, ‘Mini-burger' and a guy at another table said, ‘It's bigger than your head,'" Al Rady said. "I asked if he was a native and he said he was from four hours away. He asked who we were and I told him Adam was biking across the country for cancer research.

"He jumped off the table, handed us his card and said he was a preacher in Lewistown, Pa. He said, ‘You're going to stay with us.' He fed us barbecue chicken, took his daughter out of her room and we slept there."

The man had no idea who Adam and Al Rady were, but knew their cause and it was all that mattered.

Cancer affects all of us and many people want to help the fight, but don't know how. Adam Rady is leading the charge, but needs your support.

Donations can be made by visiting www.c2c4acure.com, e-mailing c2c4acure@yahoo.com or by visiting the Rady's residence at 3555 Good Road.

In the fight against cancer, no one can do it alone, but Rady is proving if someone starts that fight, others will help finish it.