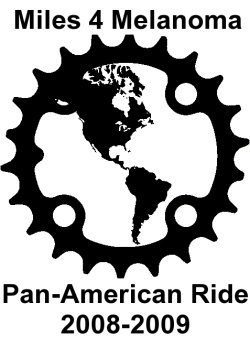 Cleveland, OH – When Kevin Madzia and Ray Query begin pedaling from the shore of Lake Erie this summer, it will be more than a daily workout, even much more than an extended vacation.  The two avid cyclists have set a goal of raising $20,000 for The Melanoma Research Foundation, and hope to promote awareness of the disease along the way, while traveling over 15,000 miles during an 8-month period.

The two will depart on August 24, 2008 from Cleveland, Ohio, “America's North Shore.”  They will make their way down through the southern United States, through Mexico, and the countries within Central America and South America. They hope to cover 50 to 100 miles per day, depending on the terrain and conditions, and expect to reach Tierra del Fuego (the “Land of Fire”) at the southern tip of South America in April of 2009.  Along the way, they will sleep in campgrounds and hostels, and prepare their own meals.

A web site has been set up at www.miles4melanoma.com , where Kevin and Ray will report on the progress of their preparations for the ride, as well as provide occasional updates during the ride.  In addition to logging as many training miles on their bicycles as possible, they are also preparing by poring over maps to plan their route, collecting the proper camping gear, adapting their bicycles to carry the gear over long distances, and getting as much advice as possible from others who have made similar journeys.  They are also taking the precaution of getting vaccinations for some of the diseases that are still prevalent in the less-developed regions of the world, such as typhoid and yellow fever. 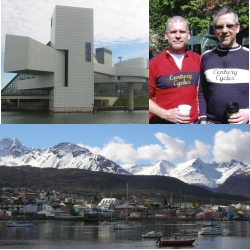 Ray's lifelong passion for the cycling lifestyle was most exemplified by a journey he undertook on a dare in 2001, when he bicycled home from Anchorage, Alaska to Cleveland.  He has dreamed for many years of making the trip by bike to Ushuaia, the “Southernmost City in the World,” which is the capital of the Tierra del Fuego province of Argentina.  He has spent time living in various places around the world, including several years doing charity work in Chile and Nepal.  He has also done extensive volunteer work locally with the Ohio City Bicycle Co-op.  He currently works as an associate at the Century Cycles store in Rocky River, Ohio, and lives with his wife in Lakewood, Ohio.

Kevin's previous foray into long-distance cycling was in 2004, when he rode from Seattle, Washington to Gloucester, Massachusetts with a touring group known as Cycle America.  In conjunction with that trip, he raised over $13,000 for The Melanoma Research Foundation.  Kevin decided to make the cross-country journey, as well as the upcoming Pan-American Ride, in honor of his father George Madzia, who succumbed to the effects of melanoma in November of 2002.  Kevin is a member of the National Mountain Bike Patrol, and is the Information Technology Coordinator for Century Cycles, based in Peninsula, Ohio, where he also resides.

The Miles 4 Melanoma Pan-American Ride team recently announced the support of their first major corporate sponsor.  Raleigh Bicycles will be providing two Diamondback Transporter bikes that Kevin and Ray will use for their trip.  The Transporter is a 26-inch wheeled mountain-style bike that is designed for heavy-duty commuting and touring.  Its all-steel frame and rigid fork will provide comfortable riding on paved roads and durable performance on the rough roads that the team will encounter in the less-developed areas of the world.

Melanoma is the most serious form of skin cancer.  However, if it is recognized and treated early, it is nearly 100 percent curable.  But if it is not, the cancer can advance and spread to other parts of the body, where it becomes hard to treat and can be fatal.  While it is not the most common of the skin cancers, it causes the most deaths.  The American Cancer Society estimates that in 2007, there were 8,110 fatalities, 5,220 in men and 2,800 in women in the U.S.

The Melanoma Research Foundation is the largest private, national organization devoted to melanoma.  Their mission is to support medical research for finding effective treatments and eventually a cure for melanoma, to educate patients and physicians about the prevention, diagnosis, and treatment of melanoma, and to act as an advocate for the melanoma community to raise the awareness of this disease and the need for a cure.

Recently named a Top 100 Bicycle Retailer in the U.S. for the seventh time, Century Cycles has hometown bicycle stores in Medina, Peninsula, and Rocky River, providing high-quality bicycles and exemplary service to cyclists and their families in Northeast Ohio for the past 16 years. Century Cycles is active locally and nationally in support of the benefits of bicycling, bicycling paths, and other issues of vital importance to the cycling community. More information can be found at www.centurycycles.com.

Raleigh Bicycles is headquartered in Kent, Washington, and manufactures high-quality bicycles under the Raleigh and Diamondback brand names.  Since 1887, they have provided bicycles for racing, touring, and recreational use for cyclists of all ages and abilities.  More information can be found at www.raleighusa.com and www.diamondback.com .

Corporations and other organizations are encouraged to contact the Miles 4 Melanoma team to discuss sponsorship, in order to assist with trip expenses, or provide equipment, services, or other contributions-in-kind in exchange for promotional consideration.