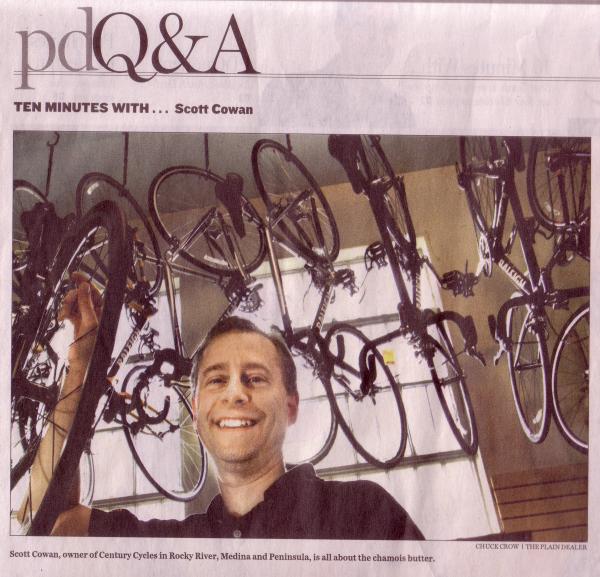 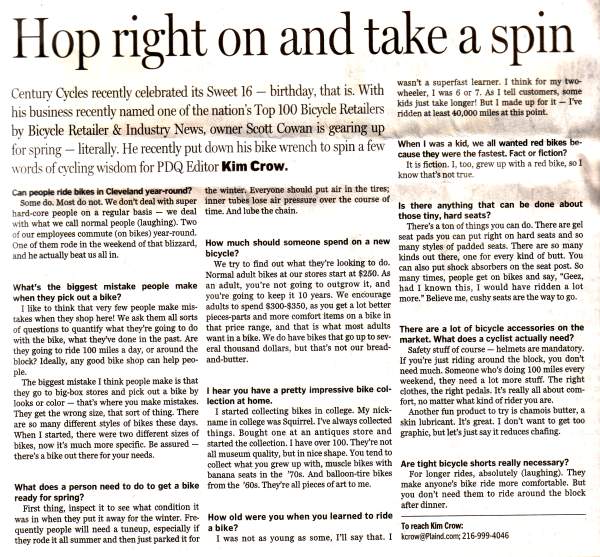 Hop right on and take a spin

Century Cycles recently celebrated its Sweet 16 -- birthday, that is. With his business recently named one of the nation's Top 100 Bicycle Retailers by Bicycle Retailer & Industry News, owner Scott Cowan is gearing up for spring -- literally. He recently put down his bike wrench to spin a few words of cycling wisdom for PDQ Editor Kim Crow.

Some do. Most do not. We don't deal with super hard-core people on a regular basis -- we deal with what we call normal people (laughing). Two of our employees commute (on bikes) year-round. One of them rode in the weekend of that blizzard, and he actually beat us all in.

What's the biggest mistake people make when they pick out a bike?

I like to think that very few people make mistakes when they shop here! We ask them all sorts of questions to quantify what they're going to do with the bike, what they've done in the past. Are they going to ride 100 miles a day, or around the block? Ideally, any good bike shop can help people.

The biggest mistake I think people make is that they go to big-box stores and pick out a bike by looks or color -- that's where you make mistakes. They get the wrong size, and that sort of thing. There are so many different styles of bikes these days. When I started, there were two different sizes of bikes, now it's much more specific. Be assured -- there's a bike out there for your needs.

What does a person need to do to get a bike ready for spring?

First thing, inspect it to see what condition it was in when they put it away for the winter. Frequently people will need a tuneup, especially if they rode it all summer and then just parked it for the winter. Everyone should put air in the tires; inner tubes lose air pressure over the course of time. And lube the chain.

How much should someone spend on a new bicycle?

We try to find out what they're looking to do. Normal adult bikes at our stores start at $250. As an adult, you're not going to outgrow it, and you're going to keep it 10 years. We encourage adults to spend $300-$350, as you get a lot better pieces-parts and more comfort items on a bike in that price range, and that is what most adults want in a bike. We do have bikes that go up to several thousand dollars, but that's not our bread-and-butter.

I hear you have a pretty impressive bike collection at home.

I started collecting bikes in college. My nickname in college was Squirrel. I've always collected things. bought one at an antiques store and started the collection. I have over 100. They're not all museum quality, but in nice shape. You tend to collect what you grew up with, muscle bikes with banana seats in the '70s. And balloon-tire bikes from the '60s. They're all pieces of art to me.

How old were you when you learned to ride a bike?

When I was a kid, we all wanted red bikes because they were the fastest. Fact or fiction?

Is there anything that can be done about those tiny, hard seats?

There a ton of things you can do. There are gel seat pads you can put right on hard seats and so many styles of padded seats. There are so many kinds out there, one for every kind of butt. You can also put shock absorbers on the seat post. So many times, people get on bikes and say, "Geez, had I know this, I would have ridden a lot more." Believe me, cushy seats are the way to go.

There are a lot of bicycle accessories on the market. What does a cyclist actually need?

Safety stuff of course -- helmets are mandatory. If you're just riding around the block, you don't need much. Someone who's doing 100 miles every weekend, they need a lot more stuff. The right clothes, the right pedals. It's really all about comfort, no matter what kind of rider you are.

Another fun product to try is chamois butter, a skin lubricant. It's great. I don't want to get too graphic, but let's just say it reduces chafing.

For longer rides, absolutely (laughing). They make anyone's bike ride more comfortable. But you don't need them to ride around the block after dinner.