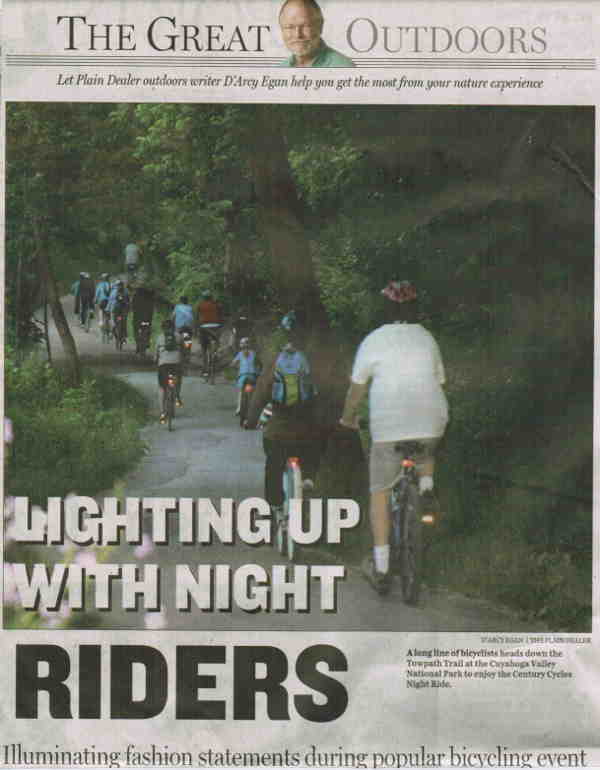 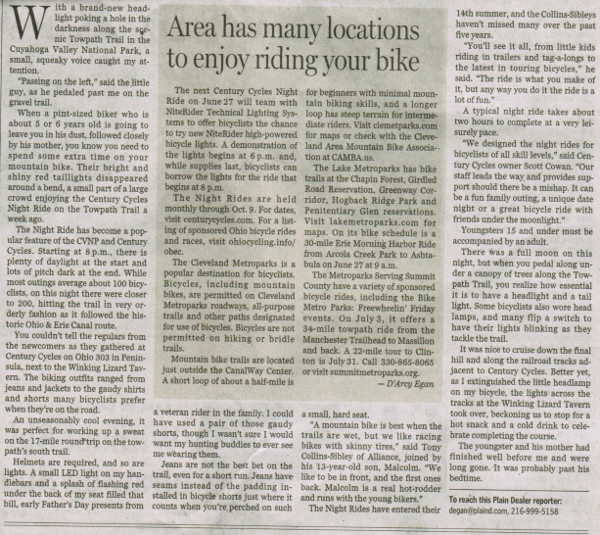 Light Up With Night Riders

With a brand-new head light poking a hole in the darkness along the scenic Towpath Trail in the Cuyahoga Valley National Park, a small, squeaky voice caught my attention.

"Passing on the left," said the little guy, as he pedaled past me on the gravel trail.

When a pint-sized biker who is about 5 or 6 years old is going to leave you in his dust, followed closely by his mother, you know you need to spend some extra time on your mountain bike. Their bright and shiny red taillights disappeared around a bend, a small part of a large crowd enjoying the Century Cycles Night Ride on the Towpath Trail a week ago.

The Night Ride has become a popular feature of the CVNP and Century Cycles. Starting at 8 p.m., there is plenty of daylight at the start and lots of pitch dark at the end. While most outings average about 100 bicyclists, on this night there were closer to 200, hitting the trail in very orderly fashion as it followed the historic Ohio & Erie Canal route.

You couldn't tell the regulars from the newcomers as they gathered at Century Cycles on Ohio 303 in Peninsula, next to the Winking Lizard Tavern. The biking outfits ranged from jeans and jackets to the gaudy shirts and shorts many bicyclists prefer when they're on the road.

An unseasonably cool evening, it was perfect for working up a sweat on the 17-mile round trip on the towpath's south trail.

Helmets are required, and so are lights. A small LED light on my handlebars and a splash of flashing red under the back of my seat filled that bill, early Father's Day presents from a veteran rider in the family. I could have used a pair of those gaudy shorts, though I wasn't sure I would want my hunting buddies to ever see me wearing them.

Jeans are not the best bet on the trail, even for a short run. Jeans have seams instead of the padding installed in bicycle shorts just where it counts when you're perched on such a small, hard seat.

"A mountain bike is best when the trails are wet, but we like racing bikes with skinny tires," said Tony Collins-Sibley of Alliance, joined by his 13-year-old son, Malcolm. "We like to be in front, and the first ones back. Malcolm is a real hot-rodder and runs with the young bikers."

The Night Rides have entered their 14th summer, and the Collins-Sibleys haven't missed many over the past five years.

"You'll see it all, from little kids riding in trailers and tag-a-longs to the latest in touring bicycles," he said. "The ride is what you make of it, but any way you do it the ride is a lot of fun."

A typical night ride takes about two hours to complete at a very leisurely pace.

"We designed the night rides for bicyclists of all skill levels," said Century Cycles owner Scott Cowan. "Our staff leads the way and provides support should there be a mishap. It can be a fun family outing, a unique date night or a great bicycle ride with friends under the moonlight."

Youngsters 15 and under must be accompanied by an adult.

There was a full moon on this night, but when you pedal along under a canopy of trees along the Towpath Trail, you realize how essential it is to have a headlight and a tail light. Some bicyclists also wore head lamps, and many flip a switch to have their lights blinking as they tackle the trail.

It was nice to cruise down the final hill and along the railroad tracks adjacent to Century Cycles. Better yet, as I extinguished the little headlamp on my bicycle, the lights across the tracks at the Winking Lizard Tavern took over, beckoning us to stop for a hot snack and a cold drink to celebrate completing the course.

The youngster and his mother had finished well before me and were long gone. It was probably past his bedtime.

Area has many locations to enjoy riding your bike

The next Century Cycles Night Ride on June 27 will team with NiteRider Technical Lighting Systems to offer bicyclists the chance to try new NiteRider high-powered bicycle lights. A demonstration of the lights begins at 6 p.m. and, while supplies last, bicyclists can borrow the lights for the ride that begins at 8 p.m.

The Night Rides are held monthly through Oct. 9. For dates, visit centurycycles.com. For a listing of sponsored Ohio bicycle rides and races, visit ohiocycling.info/obec.

Mountain bike trails are located just outside the CanalWay Center. A short loop of about a half-mile is for beginners with minimal mountain biking skills, and a longer loop has steep terrain for intermediate riders. Visit clemetparks.com for maps or check with the Cleveland Area Mountain Bike Association at CAMBA.us.

The Metroparks Serving Summit County have a variety of sponsored bicycle rides, including the Bike Metro Parks: Freewheelin' Friday events. On July 3, it offers a 34-mile towpath ride from the Manchester Trailhead to Massillon and back. A 22-mile tour to Clinton is July 31. Call 330-865-8065 or visit summitmetroparks.org.

To reach this Plain Dealer reporter: