As appeared in the Sports section of The Cleveland Plain Dealer on March 24, 2006: 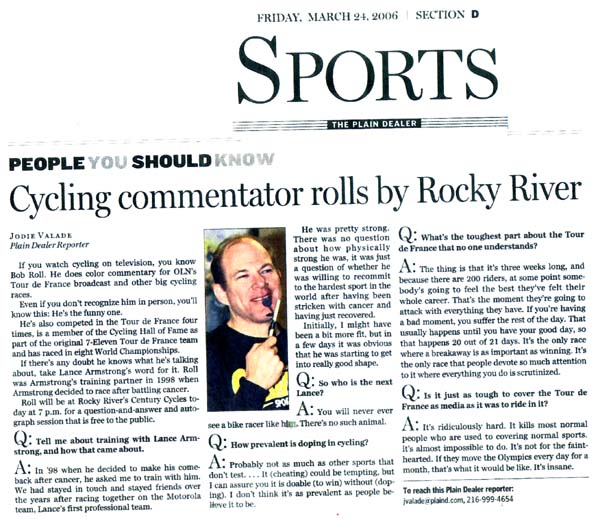 If you watch cycling on television, you know Bob Roll. He does color commentary for OLN's Tour de France broadcast adn other big cycling races.

Even if you don't recognize him in person, you'll know this: He's the funny one.

He's also competed in the Tour de France four times, is a member of the Cycling Hall of Fame as part of the original 7-Eleven Tour de France team and has raced in eight World Championships.

If there's any doubt he knows what he's talking about, take Lance Armstrong's word for it. Roll was Armstrong's training partner in 1998 when Armstrong decided to race after battling cancer.

Roll will be at Rocky River's Century Cycles today at 7 p.m. for a question-and-answer and autograph session that is free to the public.

Q: Tell me about training with Lance Armstrong, and how that came about.

A: In '98 when he decided to make his comeback after cancer, he asked me to train with him. We had stayed in touch and stayed friends over the years after racing together on the Motorola team, Lance's first professional team.

He was pretty strong. There was no question of whether he was willing to recommit to the hardest sport in the world after having been stricken with cancer and having just recovered.

Initially, I might have been a bit more fit, but in a few days it was obvious that he was starting to get into really good shape.

Q: So who is the next Lance?

A: You will never ever see a bike racer like him. There's no such animal.

Q: How prevalent is doping in cycling?

A: Probably not as much as other sports that don't test....It (cheating) could be tempting, but I can assure you it is doable (to win) without (doping). I don't think it's as prevalent as people believe it to be.

Q: What's the toughest part about the Tour de France that no one understands?

A: The thing is that it's three weeks long, and because there are 200 rider, at some point somebody's going to feel the best they've felt their whole career. That's the moment they're going to attack with everything they have. If you're having a bad moment, you suffer the rest of the day. That usually happens until you have your good day, so that happens 20 out of 21 days. It's the only race where a breakaway is as important as winning. It's the only race that people devote so much attention to it where everything you do is scrutinized.

Q: Is it just as tough to cover the Tour de France as media as it was to ride in it?

A: It's rediculously hard. It kills most normal people who are used to covering normal sports. It's almost impossible to do. It's not for the faint-hearted. If they move teh Olympics every day for a month, that's what it would be like. It's insane.