This article profiling one of our Rocky River customers appeared in the June 28, 2008 edition of the Plain Dealer : 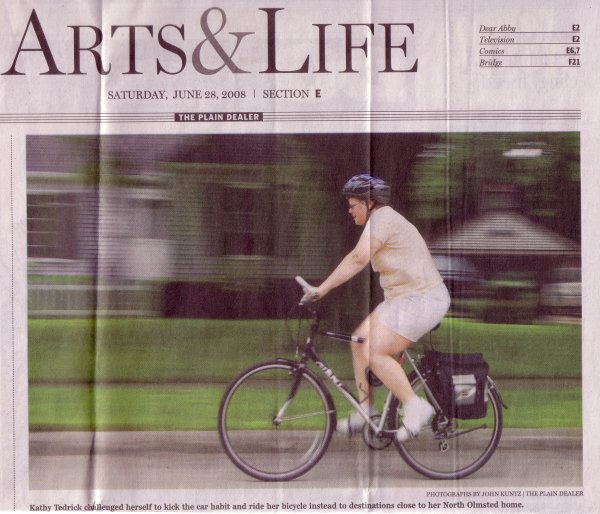 Kathy Tedrick challenged herself to kick the car habit and ride her bicycle instead to destinations close to her North Olmstead home. 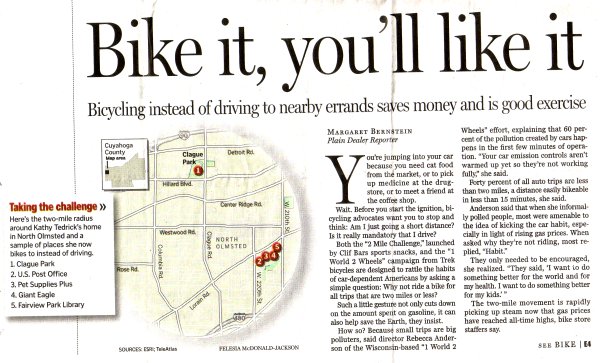 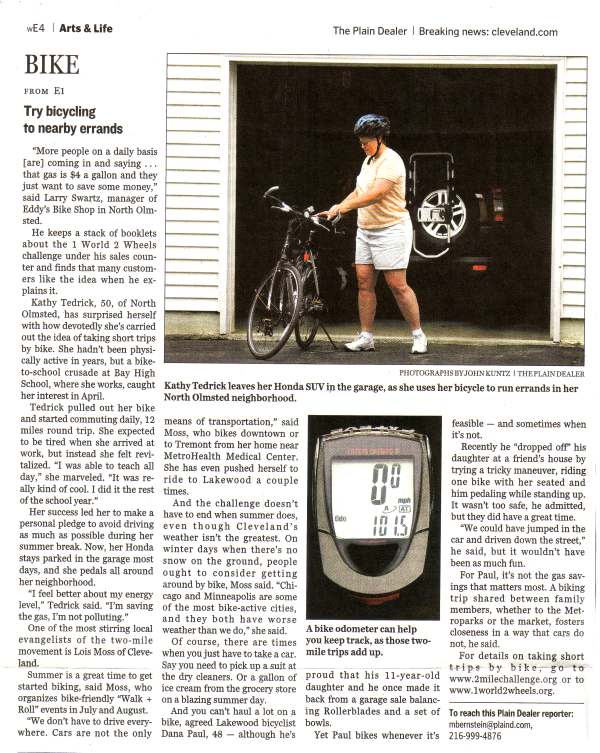 If a trip is within 2 miles, ride a bike

You're jumping into your car because you need cat food from the market, or to pick up medicine at the drugstore, or to meet a friend at the coffee shop.

Wait. Before you start the ignition, bicycling advocates want you to stop and think: Am I just going a short distance? Is it really mandatory that I drive?

Both the "2 Mile Challenge," launched by Clif Bars sports snacks, and the "1 World 2 Wheels" campaign from Trek bicycles are designed to rattle the habits of car-dependent Americans by asking a simple question: Why not ride a bike for all trips that are two miles or less?

Such a little gesture not only cuts down on the amount spent on gasoline, it can also help save the earth, they insist.

How so? Because small trips are big polluters, said director Rebecca Anderson of the Wisconsin-based "1 World 2 Wheels" effort, explaining that 60 percent of the pollution created by cars happens in the first few minutes of operation. "Your car emission controls aren't warmed up yet so they're not working fully," she said.

Forty percent of all auto trips are less than two miles, a distance easily bikeable in less than 15 minutes, she said.

Anderson said that when she informally polled people, most were amenable to the idea of kicking the car habit, especially in light of rising gas prices. When asked why they're not riding, most replied, "Habit."

"More people on a daily basis [are] coming in and saying . . . that gas is $4 a gallon and they just want to save some money," said Larry Swartz, manager of Eddy's Bike Shop in North Olmsted.

He keeps a stack of booklets about the 1 World 2 Wheels challenge under his sales counter and finds that many customers like the idea when he explains it.

Kathy Tedrick, 50, of North Olmsted, has surprised herself with how devotedly she's carried out the idea of taking short trips by bike. She hadn't been physically active in years, but a bike-to-school crusade at Bay High School, where she works, caught her interest in April.

Tedrick pulled out her bike and started commuting daily, 12 miles round trip. She expected to be tired when she arrived at work, but instead she felt revitalized. "I was able to teach all day," she marveled. "It was really kind of cool. I did it the rest of the school year."

Her success led her to make a personal pledge to avoid driving as much as possible during her summer break. Now, her Honda stays parked in the garage most days, and she pedals all around her neighborhood.

"I feel better about my energy level," Tedrick said. "I'm saving the gas, I'm not polluting."

One of the most stirring local evangelists of the two-mile movement is Lois Moss of Cleveland.

Summer is a great time to get started biking, said Moss, who organizes bike-friendly "Walk + Roll" events in July and August.

"We don't have to drive everywhere. Cars are not the only means of transportation," said Moss, who bikes downtown or to Tremont from her home near MetroHealth Medical Center. She has even pushed herself to ride to Lakewood a couple times.

And the challenge doesn't have to end when summer does, even though Cleveland's weather isn't the greatest. On winter days when there's no snow on the ground, people ought to consider getting around by bike, Moss said. "Chicago and Minneapolis are some of the most bike-active cities, and they both have worse weather than we do," she said.

Of course, there are times when you just have to take a car. Say you need to pick up a suit at the dry cleaners. Or a gallon of ice cream from the grocery store on a blazing summer day.

And you can't haul a lot on a bike, agreed Lakewood bicyclist Dana Paul, 48 -- although he's proud that his 11-year-old daughter and he once made it back from a garage sale balancing Rollerblades and a set of bowls.

Yet Paul bikes whenever it's feasible -- and sometimes when it's not.

Recently he "dropped off" his daughter at a friend's house by trying a tricky maneuver, riding one bike with her seated and him pedaling while standing up. It wasn't too safe, he admitted, but they did have a great time.

"We could have jumped in the car and driven down the street," he said, but it wouldn't have been as much fun.

For Paul, it's not the gas savings that matters most. A biking trip shared between family members, whether to the Metroparks or the market, fosters closeness in a way that cars do not, he said.

For details on taking short trips by bike, go to www.2milechallenge.com or to www.1world2wheels.org.

Tips to know before you go

At age 50, Kathy Tedrick has suddenly become a fan of biking. It happened last spring after she saved an estimated $80 in gas by riding a bike to her job at Bay High School -- and she lost a dress size, too. Now she is taking the "two-mile challenge," spending the summer biking to destinations within two miles of her North Olmsted home.

Tips for making it work:

Draw your map: Input your address at www.2milechallenge.com and it'll map a two-mile radius around your house.

Get a carryall: You'll be running errands, which means you'll need something to transport all your stuff from the library, drugstore or market. Tedrick stuffs her milk, juice and other purchases into two saddlebags that hang off the bike. A bonus: They're equipped with reflectors so she can be seen in the dark.

Secure your bike: Bike racks can be hard to find, so look for unlikely places to chain your bike. Tedrick has found that benches, street signs, even the grocery store cart corral can be a handy parking place.

Be safe: "Be careful -- not everybody looks out for bikes," says Tedrick, who's had some close calls. She avoids major streets, preferring less-traveled residential roads where stop signs force motorists to slow down. Wear a helmet, get a reflective vest for cycling after dark and study bike safety rules. At www.1world2wheels.org , click on "how to go by bike" for a helpful video with safety advice and tips for novice bike commuters.

See the upside: Yes, it takes longer to get there when you bike, but Tedrick thinks it's a lifestyle change that has many payoffs: She's become a more discerning spender because the bike doesn't hold as much stuff as a car, she likes spending more time outdoors, and she doesn't have to make time for exercise because she's already getting it.