From the Metro section of the Tuesday, May 8, 2007 edition of the Cleveland Plain Dealer. 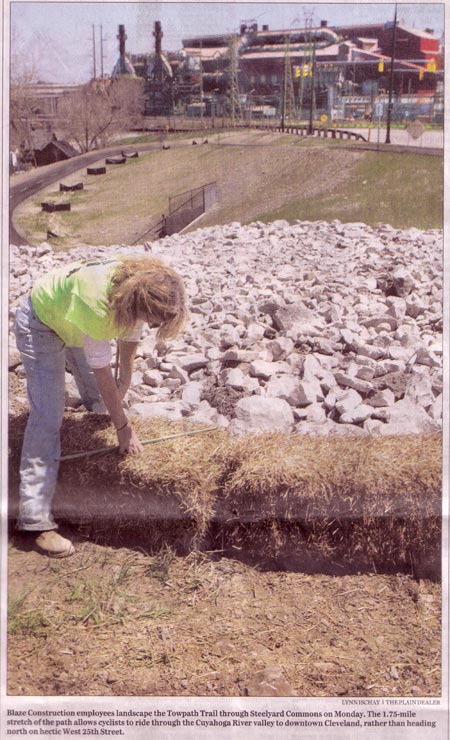 Blaze Construction employees landscape the Towpath Trail through Steelyard Commons on Monday. The 1.75-mile
stretch of the path allows cyclists to ride through the Cuyahoga River valley to downtown Cleveland, rather than heading
north on hectic West 25th Sreet.

The Towpath Trail won't reach downtown Cleveland until 2014, but cyclists now can ride north of old Harvard Avenue toward Lake Erie without having to ride on busy city streets.

A new 1.75-mile asphalt path, paid for by the Steelyard Commons shopping center, allows bikers to pedal through old industrial lands near the Cuyahoga River, making it easier to ride from Akron to the lake.

"Having been someone who put this trail on paper 17 years ago, I'm personally thrilled that we're finally into Cleveland," said Richard Sicha, principal planner for the Cuyahoga County Planning Commission. "We're in the last stretch."

The trail is historical, following the Ohio & Erie Canal and the dirt path where mules once hauled barges. The new Cleveland section, with a chain-link fence on each side, will include signs explaining the steel industry, as well as exhibits inside the former clock house of Otis Steel, Sicha said.

Eventually the section behind the retail development will link to a three-quarter-mile stretch south to Harvard Avenue, which will cost $10 million and open in 2011, officials said. Another link, from Steelyard Commons to the planned Canal Basin Park, beneath the Detroit-Superior (Veterans Memorial) Bridge, is estimated to cost $48 million and should be finished in 2014.

"It will bring a recreational opportunity to neighborhoods that are more moderate-income, with lower rates of auto ownership and higher rates of renters," Sicha said. "Those kinds of urban neighborhoods haven't had direct access to the Emerald Necklace [of parks]."

Until then, the Steelyard link is a big improvement.

Before it opened, riders maneuvered from the Columbus Road co-op down West 25th Street to the Towpath -- "a pretty ugly ride," Sheehan said. "I don't mind it. But the people we took down there on Saturday morning were glad to be in a group."

Brendan McNamara, secretary of ClevelandBikes, an advocacy group, also has ridden the new part of the path.

"It's a step in the right direction," McNamara said. "I think when it actually connects the major cities instead of running through the suburbs, its benefits will increase exponentially."

Two years ago, McNamara rode from his home near Edgewater Park to Canal Fulton and back. But it was tough to wind through the city streets of Cleveland and downtown Akron, where paths have yet to be completed.

Eventually, he said, he envisions a commuter route, on which athletic office-dwellers can ride their bikes to work, rather than sit in cars on traffic-clogged I-77.

"These types of things are exactly what Cleveland needs to keep the smart, young people here," he said. "We need to shift gears to looking at the livability of our cities more, rather than dedicating a whole city to industrial concerns."

Tim Donovan, director of the Ohio Canal Corridor, doesn't advocate riding on downtown roads, which can be rough and hectic with traffic. He's looking forward to a treelike system of bike trails, with the Towpath as the trunk, leading to the lake and the zoo and University Circle.

"It'll go anywhere you want to go," he said.

For now, at least, it'll take you through Steelyard Commons to riverside roads.