From the August 2009 issue of Ohio Sports & Fitness magazine: 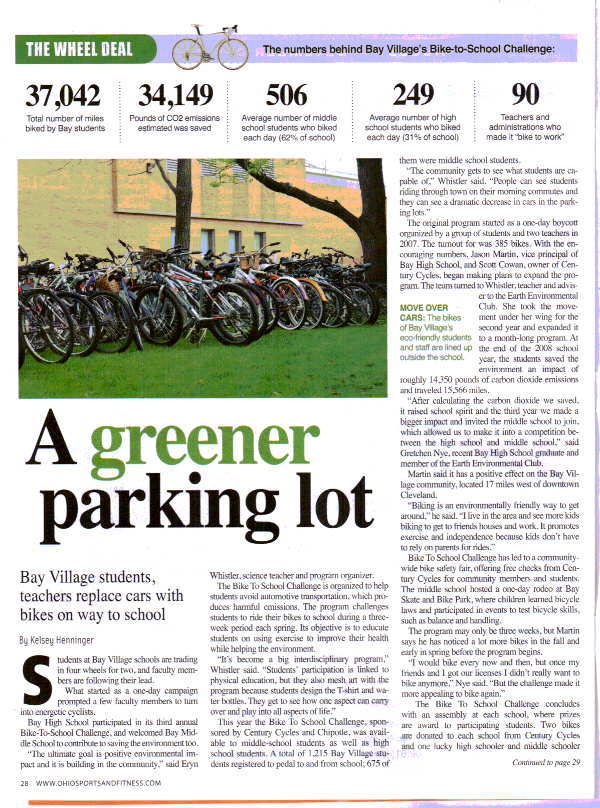 Students at Bay Village schools are trading in four wheels for two, and faculty members are following their lead.

What started as a one-day campaign prompted a few faculty members to turn into energetic cyclists.

Bay High School participated in its third annual Bike-To-School Challenge, and welcomed Bay Middle School to contribute to saving the environment too.

"The ultimate goal is positive environmental impact and it is building in the community," said Erin Whistler, science teacher and program organizer.

The Bike To School Challenge is organized to help students avoid automotive transportation, which produces harmful emissions. The program challenges students to ride their bikes to school during a three-week period each spring. Its objective is to educate students on using exercise to improve their health while helping the environment.

"It's become a big interdisciplinary program," Whister said. "Students' participation is linked to physical education, but they also mesh art with the program because students design the T-shirt and water bottles. They get to see how one aspect can carry over and play into all aspects of life."

The year the Bike To School Challenge, sponsored by Century Cycles and Chipotle, was available to middle-school students as well as high school students. A total of 1,215 Bay Village students registered to pedal to and from school; 675 of them were middle school students.

"The community gets to see what students are capable of," Whistler said. "People can see students riding through town on their morning commutes and they can see a dramatic decrease in car in the parking lots."

The original program started as a one-day boycott organized by a group of students and teachers in 2007. The turnout for was 385 bikes. With the encouraging numbers, Jason Martin, vice principal of Bay High School, and Scott Cowan, owner of Century Cycles, began making plans to expand the program. The team turned to Whistler, teacher and advisor to the Earth Environmental Club. She took the movement under her wing for the second year and expanded it to a month-long program. At the end of the 2008 school year, the students saved the environment an impact of roughly 14,350 pounds of carbon dioxide emissions and traveled 15,566 miles.

"After calculating the carbon dioxide we saved, it raised school spirit and the third year we made a bigger impact and invited the middle school to join, which allowed us to make it into a competition between the high school and middle school," said Gretchen Nye, recent Bay High School graduate and member of the Earth Environmental Club.

Martin said it has a positive effect on the Bay Village community, located 17 miles west of downtown Cleveland.

"Biking is an environmentally friendly way to get around," he said. "I live in the area and see more kids biking to get to friends houses and work. It promotes exercise and independence because kids don't have to rely on parents for rides."

Bike To School Challenge has led to a community-wide bike safety fair, offering free checks from Century Cycles for community members and students. The middle school hosted a one-day rodeo at Bay Skate and Bike Park, where children learned bicycle laws and participated in events to test bicycle skills, such as balance and handling.

The program may only be three weeks, but Martin says he has noticed a lot more bikes in the fall and early in spring before the program begins.

"I would bike every now and then, but once my friends and I got our licenses I didn't really want to bike anymore," Nye said. "But the challenge made it more appealing to bike again."

The Bike To School Challenge concludes with an assembly at each school, where prizes are award to participating students. Two bikes are donated to each school from Century Cycles and one lucky high schooler and middle schooler wins free burritos for a year, courtesy of Chipotle. Other sponsors include: Westlake Salon, Caribou Coffee, Mitchell's Ice Cream, Knog bicycle lights and Bay's Parent Teacher Associations.

"I think it's unusual to get a team of very different adults who work so well together," Whistler said about continuing the Bike To School Challenge. "We all have the same mindset and share the workload. Everything runs smoothly and everyone is great to work with; these things keep the program going, and we are excited to do it every year, and when the events are over everyone maintains a connection."

The Bike To School Challenge has sparked the faculty's interest to expand their biking adventures.

"My family did a lot of biking when I was younger and as I moved through life it became more of an occasional recreational thing, but I've gotten pretty hooked back into biking again," Martin said about his rekindled passion for biking.

Mark Smithberger, Bay High School athletic director, said he didn't do much riding before getting involved with the MS 150 ride last year. Inspired by a friend, Smithberger and Martin gathered a team of six members to complete the two 75-miles rides in two days.

Smithberger predicted he rode about 3,000 miles last year. He is now in training for this year's MS 150 to be held Aug. and said he has ridden just over 1,000 miles.

Multiple sclerosis interrupts the flow of information between the brain and the body and stops people from moving. This unpredictable, often disabling disease of the central nervous system affects more than 400,000 people in the U.S. and 2.5 million word-wide, according to bikeohg.nationalmssociety.org.

This year the Bay High team has 14 members from the district. Everyone on the team has a direct link to Bay High and their goal is to raise $5,000 for the MS society.

"The best thing about ride last year was the socialization," Smithberger said. "It really is a charity ride not a race. We all have a fun just being with each other."

Kelsey Henninger is a journalism and communication major at Kent State University, a designer and freelance writer. She can be reached at khennin2@kent.edu.