Century Cycles owner Scott Cowan was featured in the cover photo of the April 2009 issue of Ohio Sports & Fitness, along with an article about his bicycle collection. Scroll down below the images to read the text of the article, or you can download the PDF version. 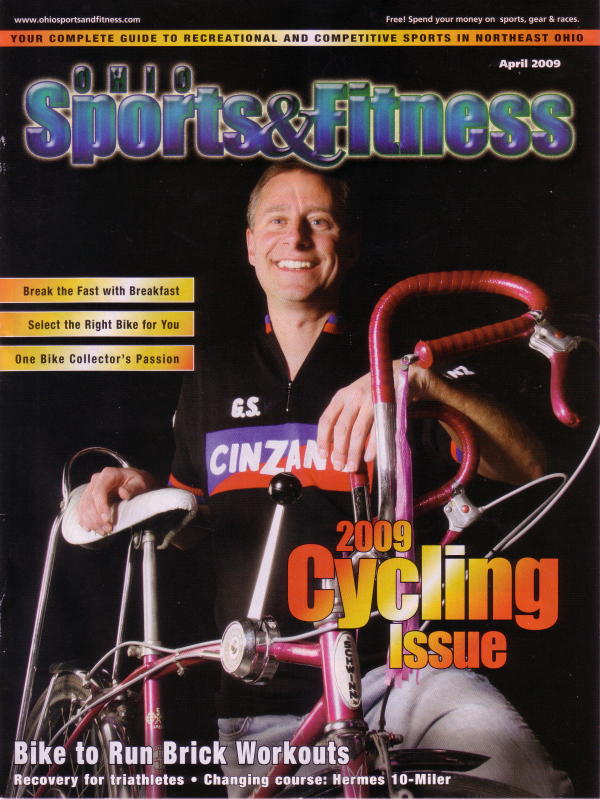 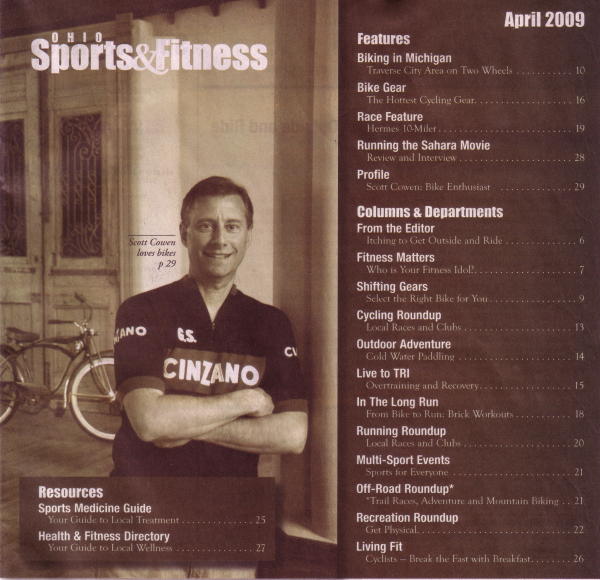 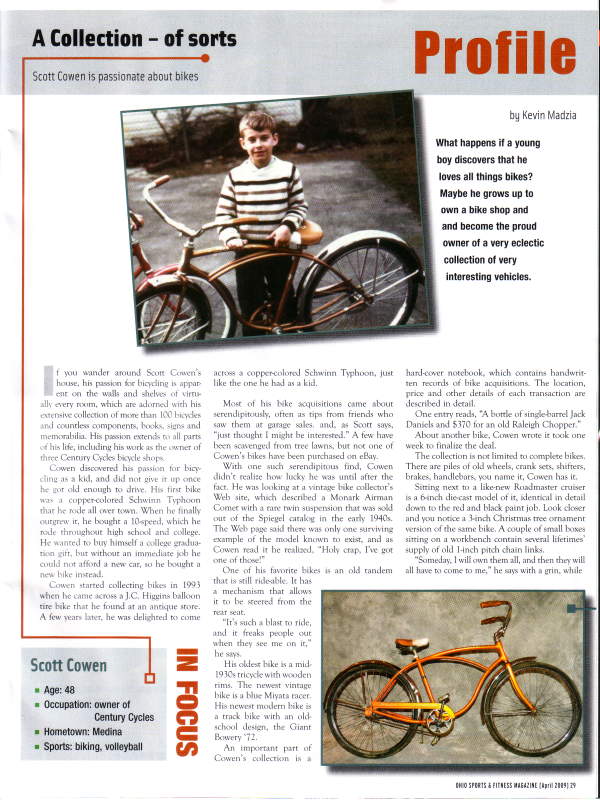 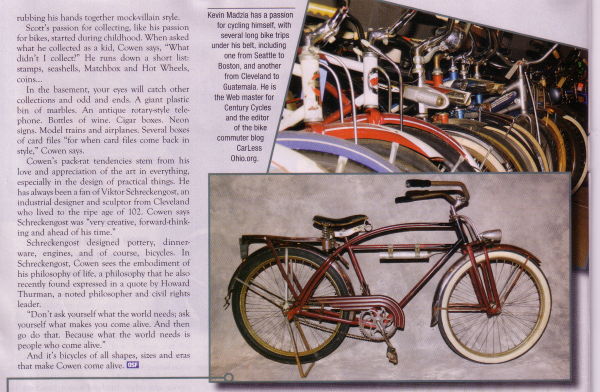 A Collection - of sorts

What happens if a young boy discovers that he loves all things bikes? Maybe he grows up to own a bike shop and become the proud owner of a very eclectic collection of very interesting bicycles.

If you wander around Scott Cowan's house, his passion for bicycling is apparent on the walls and shelves of virtually every room, which are adorned with his extensive collection of over 100 bicycles and countless components, books, signs and memorabilia. His passion extends to all parts of his life, including his work as the owner of three Century Cycles bicycle shops.

Cowan discovered his passion for bicycling as a kid, and did not give it up once he got old enough to drive. His first bike was a copper-colored Schwinn Typhoon that he rode all over town. When he finally outgrew it, he bought a 10-speed, which he rode throughout high school and college. He wanted to buy himself a college graduation gift, but without an immediate job he could not afford a new car, so bought a new bike instead.

Cowan started collecting bikes in 1993 when he came across a J.C. Higgins balloon tire bike that he found at an antique store. A few years later, he was delighted to come across a copper-colored Schwinn Typhoon, just like the one he had as a kid.

Most of his bike acquisitions came about serendipitously, often as tips from friends who saw them at garage sales and, as Scott says, "just thought I might be interested." A few have been scavenged from tree lawns, but not one of the Cowan's bikes have been bought on eBay.

With one such serendipitous find, Cowan didn't realize how lucky he was until after the fact. He was looking at a vintage bike collector's Web site, which described a Monark Airman Comet with a rare twin suspension that was sold out of the Spiegel catalog in the early 1940s. The Web page said that there was only one surviving example of the model known to exist, and as Scott read it, he realized, "Holy crap, I've got one of those!"

One of his favorite bikes is an old tandem that is still ridable. It has a mechanism that allows it to be steered from the rear seat.

"It's such a blast to ride, and it freaks people out when they see me on it," he says.

His oldest bike is a mid-1930s tricycle with wooden rims. The newest vintage bike is a blue Miyata racer. His newest modern bike is a track bike with an old-school design, the Giant Bowery '72.

An important part of Cowan's collection is a hard-cover notebook, which contains hand-written records of bike acquisitions. The location, price and other details of each transaction are described in detail.

One entry reads, "A bottle of single-barrel Jack Daniels and $370 for an old Raleigh Chopper."

About another bike, Cowan wrote it took one week to finalize the deal.

The collection is not limited to complete bikes. There are piles of old wheels, cranksets, shifters, brakes, handlebars, you name it, Cowan has it.

Sitting next to a Roadmaster cruiser bike is a six-inch die-cast model of it, identical in detail down to the red and black paint job. Look closer and you notice a 3-inch Christmas tree ornament version of the same bike. A couple of small boxes sitting on a workbench contain several lifetimes' supply of old 1-inch pitch chain links.

"Someday, I will own them all, and then they will all have to come to me," he says with a grin, while rubbing his hands together mock-villain style.

Scott's passion for collecting, like his passion for bikes, started during childhood. When asked what he collected as a kid, Cowan says, "What didn't I collect?" He runs down a short list: stamps, seashells, Matchbox and Hot Wheels, coins...

In the basement, your eyes will catch other collections and odds and ends. A giant plastic bin of marbles. An antique rotary-style telephone. Bottles of wine. Cigar boxes. Neon signs. Model trains and airplanes. Several boxes of card files, "for when card files come back in style," Cowan says.

Scott's pack-rat tendencies stem from his love and appreciation of the art in everything, especially in the design of practical things. He has always been a fan of Viktor Schreckengost, an industrial designer and sculptor from Cleveland who lived to the ripe age of 102. Cowan says Schreckengost was "very creative, forward-thinking and ahead of his time."

Schreckengost designed pottery, dinnerware, engines, and of course, bicycles. In Schreckengost, Cowan sees the embodiment of his philosophy of life, a philosophy that he also recently found expressed in a quote by Howard Thurman, a noted philosopher and civil rights leader.

And it's bicycles of all shapes, sizes and eras that make Cowan come alive.

Kevin Madzia has a passion for bicycling himself, with several long bike trips under his belt, including one from Seattle to Boston, and another from Cleveland to Guatemala. He is the Web master for Century Cycles and the editor of the bike commuter blog CarLessOhio.org.