Featured in "45 Gear Picks of the Year"

The OCR 1 W from Giant's 2007 line of bicycles was featured in the December 2006/January 2007 issue of National Geographic Adventure: 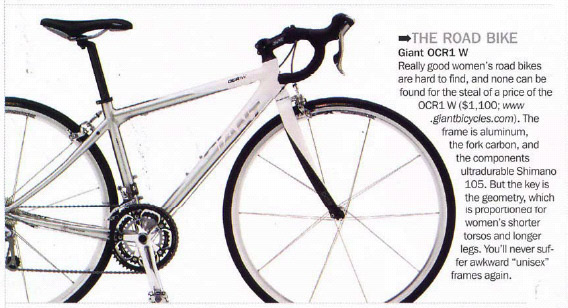 Giant OCR1 W - Really good women's road bikes are hard to find, and none can be found for the steal of a price of the OCR1 W ($1,100; www.giantbicycles.com). The frame is aluminum, the fork carbon, and the components ultradurable Shimano 105. But the key is the geometry, which is proportioned for women's shorter torsos and longer legs. You'll never suffer awkward "unisex" frames again.