Mary Zalmanek visited the Cleveland area in the summer of 2018 to research a "getaway" article for MotorHome magazine. Below is an excerpt from page 26 of the issue that published her article. 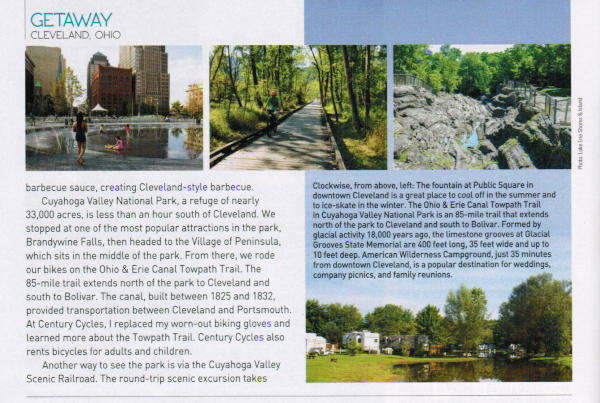 Cuyahoga Valley National Park, a refuge of nearly 33,000 acres, is less than an hour south of Cleveland. We stopped at one of the most popular attractions in the park, Brandywine Falls, then headed to the Village of Peninsula, which sits in the middle of the park. From there, we rode our bikes on the Ohio & Erie Canal Towpath Trail. The 85-mile trail extends north of the park to Cleveland and south to Bolivar. The canal, built between 1825 and 1832, provided transportation between Cleveland and Portsmouth. At Century Cycles, I replaced my worn-out biking gloves and learned more about the Towpath Trail. Century Cycles also rents bicycles for adults and children.