Mike Petcher, Sales Manager from our Medina store, was quoted in an article about bicycle safety in this article from the June 20, 2008 edition of the Medina Gazette: 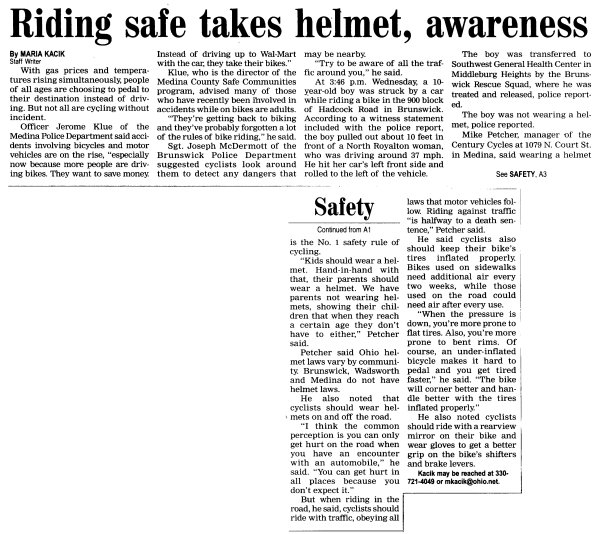 With gas prices and temperatures rising simultaneously, people of all ages are choosing to pedal to their destination instead of driving. But not all are cycling without incident.

Officer Jerome Klue of the Medina Police Department said accidents involving bicycles and motor vehicles are on the rise, “especially now because more people are driving bikes. They want to save money. Instead of driving up to Wal-Mart with the car, they take their bikes.”

Klue, who is the director of the Medina County Safe Communities program, advised many of those who have recently been involved in accidents while on bikes are adults.

“They’re getting back to biking and they’ve probably forgotten a lot of the rules of bike riding,” he said.

Sgt. Joseph McDermott of the Brunswick Police Department suggested cyclists look around them to detect any dangers that may be nearby.

“Try to be aware of all the traffic around you,” he said.

At 3:46 p.m. Wednesday, a 10-year-old boy was struck by a car while riding a bike in the 900 block of Hadcock Road in Brunswick. According to a witness statement included with the police report, the boy pulled out about 10 feet in front of a North Royalton woman, who was driving around 37 mph. He hit her car’s left front side and rolled to the left of the vehicle.

The boy was transferred to Southwest General Health Center in Middleburg Heights by the Brunswick Rescue Squad, where he was treated and released, police reported.

The boy was not wearing a helmet, police reported.

Mike Petcher, manager of the Century Cycles at 1079 N. Court St. in Medina, said wearing a helmet is the No. 1 safety rule of cycling.

He also noted that cyclists should wear helmets on and off the road.

“I think the common perception is you can only get hurt on the road when you have an encounter with an automobile,” he said. “You can get hurt in all places because you don’t expect it.”

But when riding in the road, he said, cyclists should ride with traffic, obeying all laws that motor vehicles follow. Riding against traffic “is halfway to a death sentence,” Petcher said.

He said cyclists also should keep their bike’s tires inflated properly. Bikes used on sidewalks need additional air every two weeks, while those used on the road could need air after every use.

He also noted cyclists should ride with a rearview mirror on their bike and wear gloves to get a better grip on the bike’s shifters and brake levers.