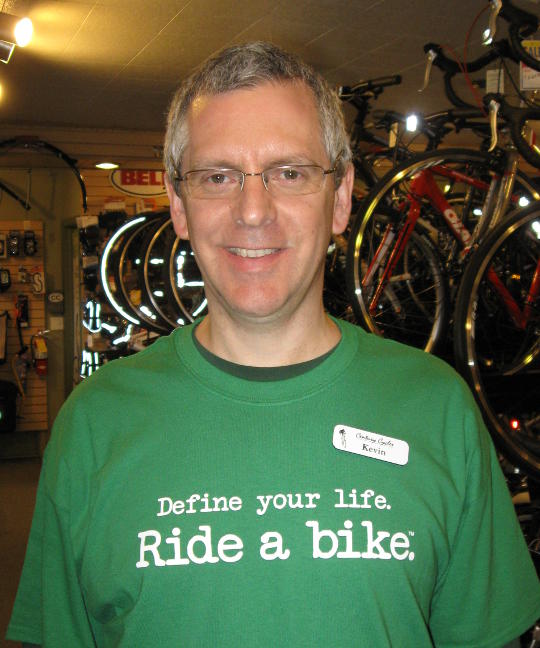 I started working at Century Cycles in the fall of 2004, after my previous career as a billionaire/cowboy/astronaut/computer programmer. I help out on the sales floor when needed, but if you have ever ordered something from our web site, read something in our email newsletter or on social media, that's mostly my work. I also handle ordering parts and accessories from some of our suppliers, and Surly and Salsa bikes.

I enjoy all kinds of cycling--from road, mountain, long-distance multi-day touring, to casual jaunts on the Towpath Trail or Bike & Hike Trail and other bike paths. I own five bikes: three Salsas, one Surly, and a classic Mongoose road bike.

My most epic bike trips were a supported tour from Seattle, WA to Gloucester, MA with Cycle America in 2004, a nine-day self-supported tour around southwestern New Mexico in 2007, a self-supported tour from Cleveland to Guatemala City in 2008, bikepacking the High Country Pathway in Michigan in 2012, RAGBRAI in 2006 and 2017, a solo trip on the Ohio to Erie Trail from Cincinnati to Cleveland in 2015, and a credit-card tour with friends from Washington, DC to Pittsburgh, PA on the C&O Canal/GAP Trails in 2016.

On October 8, 2017, I ran and finished the Towpath Marathon, my first (and probably last) marathon. Running sucks, but I still do it once in a while.

My bike bucket list includes the Great Divide Mountain Bike Route and the Olympic Discovery Trail. I live in Sagamore Hills with the love of my life Lisa, and our cats Stevie and Tommy.