From the Ohio Entrepreneur feature in the May 2007 issue of Inside Business magazine: 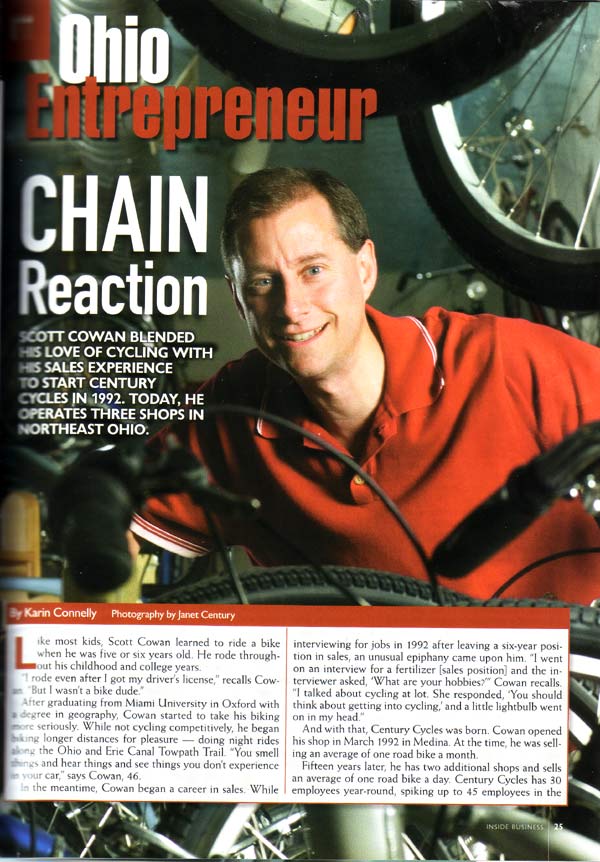 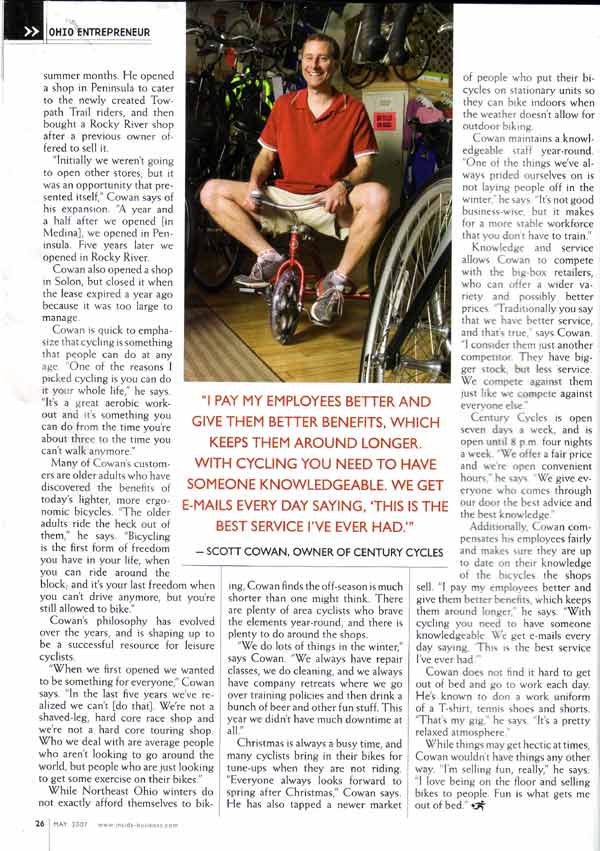 Scott Cowan blended his love of cycling with his sales experience to start Century Cycles in 1992. Today he operates three shops in Northeast Ohio.

Like most kids, Scott Cowan learned to ride a bike when he was five or six years old. He rode throughout his childhood and college years.

"I rode even after I got my driver's license," recalls Cowan. "But I wasn't a bike dude."

After graduating from Miami University in Oxford with a degree in geography, Cowan started to take his biking more seriously. While not cycling competitively, he began biking longer distances for pleasure - doing night rides along the Ohio and Erie Canal Towpath Trail. "You smell things and hear things and see things you don't experience in your car, " says Cowan, 46.

In the meantime, Cowan began a career in sales. While interviewing for jobs in 1992 after leaving a six-year position in sales, an unusual epiphany came upon him. "I went on an interview for a fertilizer [sales position] and the interview asked "What are your hobbies?" Cowan recalls. "I talked about cycling a lot. She responded 'You should think about getting into cycling,' and a little light bulb went on in my head."

And with that, Century Cycles was born. Cowan opened his shop in March 1992 in Medina. At the time, he was selling an average of one road bike a month.

Fifteen years later, he has two additional shops and sells an average of one road bike a day. Century Cycles has 30 employees year-round, spiking up to 45 employees in the summer months. He opened a shop in Peninsula to cater to the newly-opened Towpath Trail riders, and then bought a Rocky River shop after a previous owner offered to sell it.

"Initially we weren't going to open other stores, but it was an opportunity that presented itself," Cowan says of his expansion. "A year and a half after we opened [in Medina], we opened in Peninsula. Five years later we opened in Rocky River."

Cowan also opened a shop in Solon, but closed it when the lease expired a year ago because it was too large to manage.

Cowan is quick to emphasize that cycling is something that people can do at any age. "One of the reasons I picked cycling is you can do it your whole life," he says. "It's a great aerobic workout and it's something you can do from the time you're about three to the time you can't walk anymore."

Many of Cowan's customers are older adults who have discovered the benefits of today's lighter, more ergonomic bicycles. "The older adults ride the heck out of them," he says. "Bicycling is the first form of freedom you have in your life, when you can ride around the block, and it's your last freedom when you can't drive anymore, but you're still allowed to bike."

Cowan's philosophy has evolved over the years, and is shaping up to be a successful resource for leisure cyclists.

"When we first opened we wanted to be something for everyone," Cowan says. "In the last five years we've realized we can't [do that]. We're not a shaved-leg, hard core race shop, and we're not a hard core touring shop. Who we deal with are average people who aren't looking to go around the world, but people who are just looking to get some exercise on their bikes."

While Northeast Ohio winters do no exactly afford themselves to biking, Cowan finds the off-season is much shorter than one might think. There are plenty of area cyclists who brave the elements year-round, and there is plenty to do around the shops.

"We do lots of things in the winter," says Cowan. "We always have repair classes, we do cleaning, and we always have company retreats where we go over training policies and then drink a bunch of beer and other fun stuff. This year we didn't have much downtime at all."

Christmas is always a busy time, and many cyclists bring in their bikes for tune-ups when they are not riding. "Everyone always looks forward to spring after Christmas," Cowan says. He has also tapped a newer market of people who put their bicycles on stationary units so they can bike indoors when the weather doesn't allow for outdoor biking.

Cowan maintains a knowledgeable staff year-round. "One of the things we've always prided ourselves on is not laying people off in the winter," he says. "It's not good business-wise, but it makes for a more stable workforce that you don't have to train."

Knowledge and service allows Cowan to compete with the big-box retailers, who can offer a wider variety and possibly better prices. "Traditionally you say that we have better service, and that's true," says Cowan. "I consider them just another competitor. They have bigger stock but less service. We compete against them just like we compete against everyone else."

Century Cycles is open seven days a week, and is open until 8 p.m. four nights a week. "We offer a fair price and we're open convenient hours," he says. "We give everyone who comes through our door the best advice and the best knowledge."

Additionally, Cowan compensates his employee fairly and makes sure they are up to date on their knowledge of the bicycles the shops sell. "I pay my employees better and give them better benefits, which keeps them around longer," he says. "With cycling you need to have someone knowledgeable. We get e-mails every day saying, 'This is the best service I've ever had.'"

Cowan does not find it hard to get out of bed and go to work each day. He's known to don the work uniform of a T-shirt, tennis shoes and shorts. "That's my gig," he says. "It's a pretty relaxed atmosphere."

While things may get hectic at times, Cowan wouldn't have things any other way. "I'm selling fun, really," he says. "I love being on the floor and selling bikes to people. Fun is what gets me out of bed."