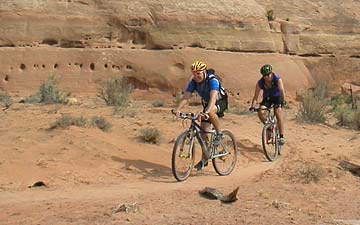 The International Mountain Bicycling Association (IMBA) recently released its report card for 2004. For the first time, a state east of the Mississippi River has earned honors as the top destination in the US for mountain biking. The state that earned this "A" grade was our neighbor West Virginia. The report cites the support of both the state's governor and chief of tourism as factors that contributed to West Virginia's status as a mountain bike mecca. One potential problem area for the future that was identified is the current legislation under consideration in Congress that would affect access to the Monongahela National Wilderness.

Ohio ranked 31st of all US states, but has seen improvements in recent years, and more improvement is expected in the future. Positive aspects that were mentioned are "stellar organization" and shared use partnerships. The main problem: Cleveland access not rock and roll...yet.

Internationally, the Canadian province of British Columbia retained its spot as the number one destination for mountain biking in the world.