From the Travel section of the Akron Beacon Journal of July 29, 2007. 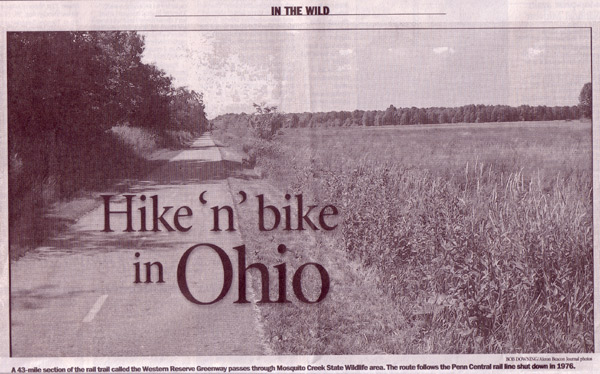 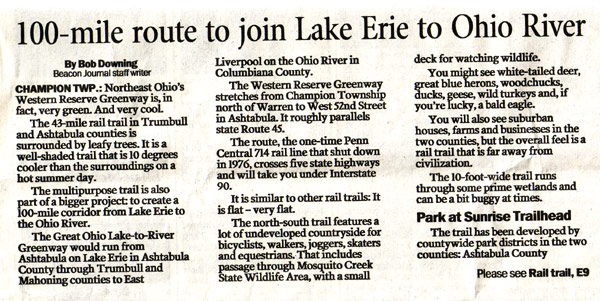 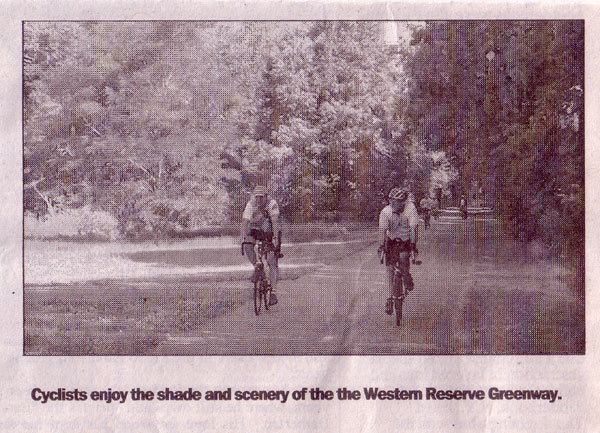 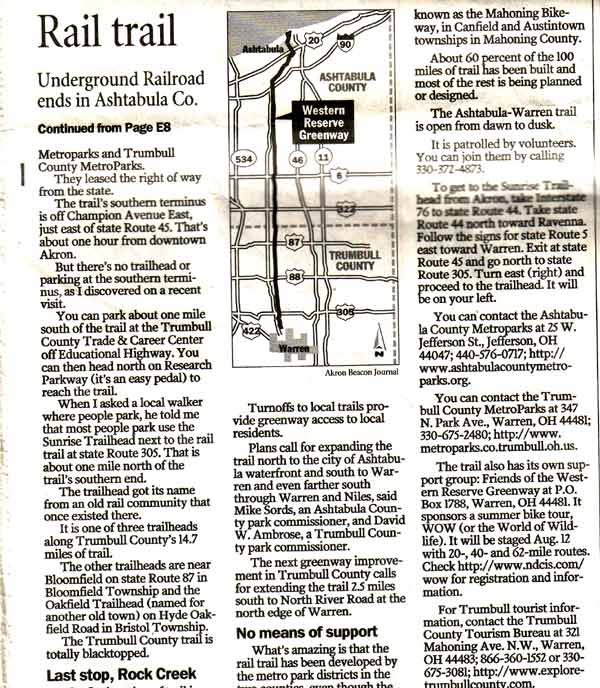 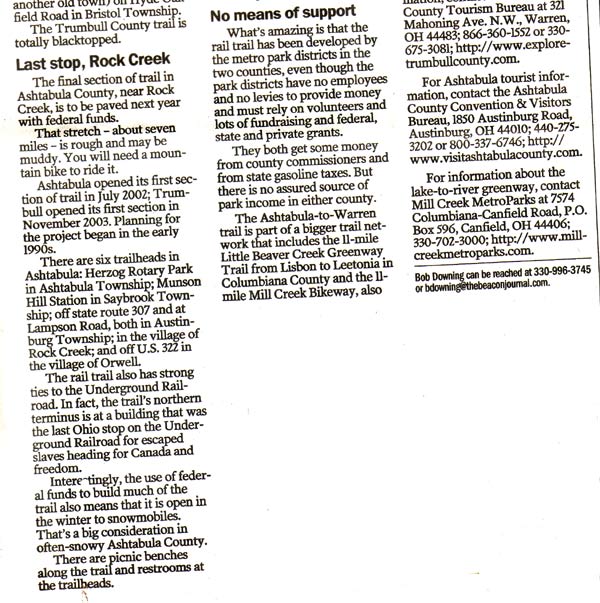 The 43-mile rail trail in Trumbull and Ashtabula counties is surrounded by leafy trees. It is a well-shaded trail that is 10 degrees cooler than the surroundings on a hot summer day.

The multipurpose trail is alos part of a bigger project: to create a 100-mile corridor from Lake Erie to the Ohio River.

The Great Ohio Lake-to-River Greenway would run from Ashtabula on Lake Erie in Ashtabula County through Trumbull and Mahoning counties to East Liverpool on the Ohio River in Columbiana County.

The route, the one-time Penn Central 714 rail line that shut down in 1976, crosses five state highways and will take you under Interstate 90.

It is similar to other rail trails: It is flat - very flat.

The north-south trail features a lot of undeveloped countryside for bicyclists, walkers, joggers, skaters and equestrians. That includes passage through Mosquito Creek State Wildlife Area, with a small deck for watching wildlife.

You might see white-tailed deer, great blue herons, woodchucks, ducks, geese, wild turkeys and, if you're lucky, a bald eagle.

You will also see suburban houses, farms and businesses in the two counties, but the overall feel is a rail trail that is far away from civilization.

The 10-foot-wide trail runs through some prime wetlands and can be a bit buggy at times.

The trail has been developed by countywide pakr districts in the two counties: Ashtabula County Metroparks and Trumbull County MetroParks.

They leased the right of way from the state.

The trail's southern terminus is off Champion Avenue East, just east of state Route 45. That's about one hour from downtown Akron.

But there's no trailhead or parking at the southern terminus, as I discovered on a recent visit.

You can park abotu one mile south of the trail at the Trumbull County Trade & Career Center off Educational Highway. You can then head north on Research Parkway (it's an easy pedal) to reach the trail.

When I asked a local walker where people park, he told me that most people use the Sunrise Trailhead next to the rail trail at state Route 305. That is about one mile north of the trail's southern end.

The trailhead got its name from an old rail community that once existed there.

It is one of three trailheads along Trumbull County's 14.7 miles of trail.

The other trailheads are near Bloomfield on state Route 87 in Bloomfield Township adn the Oakfield Trailhead (named for another old town) on Hyde Oakfield Road in Bristol Township.

The final section of trail in Ashtabula County, near Rock Creek, is to be paved next year with federal funds.

That stretch - about seven miles - is rough and may be muddy. You will need a mountain bike to ride it.

Interestingly, the use of federal funds to build much of the trail also means that it is open in the winter to snowmobiles. That's a big consideration in often-snowy Ashtabula County.

There are picnic benches along the trail and restrooms at the trailheads.

The next greenway improvement in Trumbull County calls for extending the trail 2.5 miles south to North River Road at the north edge of Warren.

No means of support

What's amazing is that the rail trail has been developed by the metro park districts in the two counties, even though the park districts have no employees and no levies to provide money and must rely on volunteers and lots of fundraising and federal, state and private grants.

They both get some money from county commissioners and from state gasoline taxes. But there is no assured source of park income in either county.

The Ashtabula-to-Warren trail is part of a bigger trail network that includes the 11-mile Little Beaver Creek Greenway Trail from Lisbon to Leetonia in Columbiana County and the 11-mile Mill Creek Bikeway, also known as teh Mahoning Bikeway, in Canfield and Austintown townships in Mahoning County.

About 60 percent of the 100 miles of trail has been built and most of the rest is being planned or designed.

The Ashtabula-Warran trail is open from dawn to dusk.

The trail also has its own support group: Friends of the Western Reserve Greenway at P.O. Box 1788, Warren, OH 44481. It sponsor a summer bike tour, WOW (or the World of Wildlife). It will be staged Aug. 12 with 20-, 40-, and 62-mile routes. Check http://www.ndcis.com/wow for registration and information.