"Rebels Without a Car" was an article by Michael Gill that appeared in the May 12, 2005 issue of The Free Times.  It featured stories about people in the Cleveland area who do not own cars and do all of their traveling by bicycle, including Ray Query of our Solon store.

Click here to read the article on the Free Times web site.

The following appeared a week later in May 18-24, 2005 issue of The Free Time's Letters section: 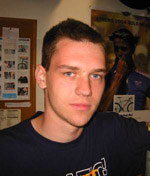 Kevin is 20 years old and lives with his grandfather in a scruffy neighborhood on the Near West Side of Cleveland. He is a soft-spoken, extremely bright guy who left Rhodes High School with seven credits yet to finish. He never wanted a driver's license and rides his bike for transportation. A few months ago, he joined the Army and is hoping to go to college. Between basic training and his possible deployment, he is working at Century Cycles in Solon. He rides a bike to his job.

Kevin was mentioned in the Free Times article "Rebels Without A Car" (May 11). That same day, Kevin was forced off the road by a white van on Harvard Road near Broadway. The driver of the van purposely drove next to Kevin, inching over closer and closer until Kevin was forced to put his foot down on the curb. As the van grazed the bicycle, Kevin was thrown to the sidewalk. Kevin was one of the lucky ones. He lived.

The majority of drivers are couteous and careful, but all it takes is one nasty or ignorant driver to cause a tragedy. I'm sure the driver of the white van was thinking "I'll teach this kid a lesson," or "This'll be funny." To the friends and families of cyclists who are killed, this type of driving is not a joke. People on bicycles are real, thinking, feeling humans who have families and lives, just like you.

Drivers: When you see a bicycle on the road, move over and leave at least four feet when passing. Don't pass a bike on a hill when you can't see what is in the oncoming lane. Don't honk your horn at cyclists because we usually hear your car approaching. Don't pass a bike and then put on your brakes to make a right turn. Don't try ot cut in front of a cyclist when you're making a left turn. The eight seconds you might save are not worth someone's life.

Cyclists: Ride in the same direction as traffic. Obey all traffic signals; don't run through stop signs or signals. Make eye contact and let the cars know you are there. Don't make quick maneuvers. Wear bright clothes and have lights on your bike.

To the driver of the white van: you acted maliciously. He is a real person, and you could have killed him.

Be courteous to your fellow road users. Share the road.