As seen in the January 2005 issue of Bicycle Retailer and Industry News: 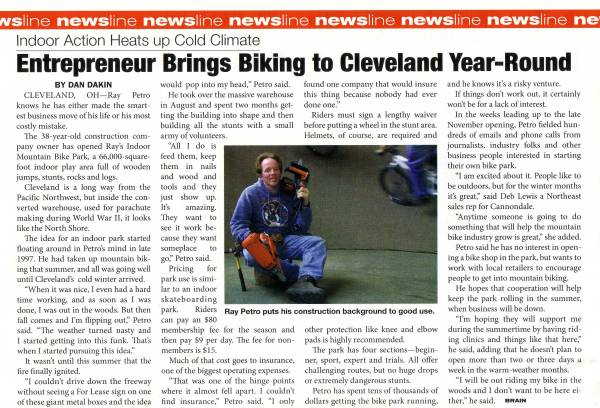 CLEVELAND, ON - Ray Petro knkow he has either made the smartest business move of his life or his most costly mistake.

Clevelan is a long way from the Pacific Northwest, but inside the converted warehouse, used for parachute making during World War II, it looks like the North Shore.

The idea for an indoor park started floating around in Petro's mind in late 1997. He had taken up mountain biking that summer, and all was going well until Cleveland's cold winter arrived.

"When it was nice, I even had a hard time working, and as soon as I was done, I was out in the woods. But then fall comes and I'm flipping out," Petro said. "The weather turned nasty and I started getting into this funk. That's when I started pursuing this idea."

It wasn't until this summer that the fire finally ignited.

"I couldn't drive down the freeway without seeing a For Lease sign on one of these giant metal boxes and the idea would pop into my head," Petro said.

He took over the massive warehouse in August and spent two month getting the building into shape and then building all the stunts with a small army of volunteers.

"All I do is feed them, keep them in nails and wood and tools and they just show up. It's amazing . They want to see it work because they want someplace to go," Petro said.

Pricing for park use is similar to an indoor skateboarding park. Rider can pay an $80 membership fee for the season and then pay $9 per day. The fee for non-members is $15.

Much of that cost goes to insurance, one of the biggest operating expenses.

"That was one of the hinge points where it almost fell apart. I couldn't find insurance," Petro said. "I only found one company that would insure this thing because nobody had ever done one."

Riders must sign a lengthy waiver before putting a wheel in the stunt area. Helmets, of course, are required and other protection like knee and elbow pads is highly recommended.

The park has four sections--beginner, sport, expert, and trials. All offer challenging routes, but no huge drops or extremely dangerous stunts.

Petro has spent tens of thousands of dollars getting the bike park running, and he knows it's a risky venture.

If things don't work out, it certainly won't be for lack of interest.

In the weeks leading up to the late November opening, Petro fielded hundreds of emails and phone call from journalists, industry folks and other business people interested in starting their own bike park.

"I am excited about it. People like to be outdoors, but for the winter months it's great," said Deb Lewis a Northeast sales rep for Cannondale.

"Anytime someone is going to do something that will help the mountain bike industry grow is great," she added.

Petro said he has no interest in opening a bike shop in the park, but wants to work with local retailers to encourage people to get into mountain biking.

He hopes that cooperation will help keep the park rolling in the summer, when business will be down.

"I'm hoping they will support me during the summertime by having riding clinics and things like that here," he said, adding that he doesn't plan to open more than two or three day a week in the warm-weather months.

"I will be out riding my bike in the woods and I don't want to be here either," he said.