(As seen in the Sunday, August 6, 2006 edition of The Cleveland Plain Dealer.) 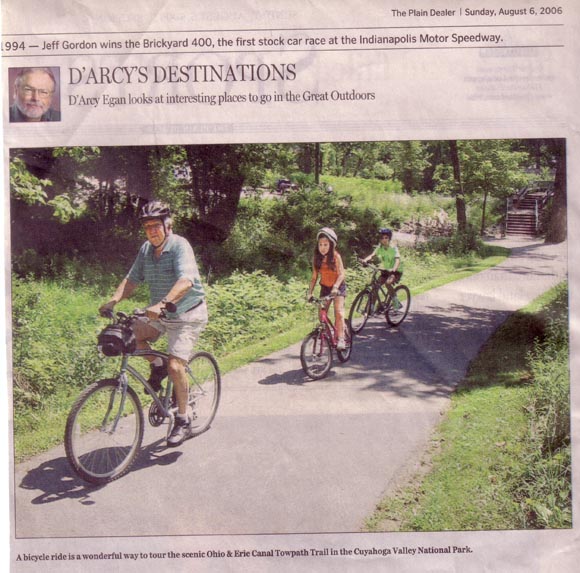 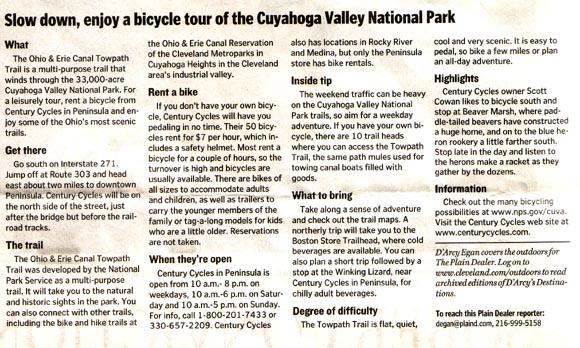 Slow down, enjoy a bicycle tour of the Cuyahoga Valley National Park

What
The Ohio & Erie Canal Towpath Trail is a multi-purpose trail that winds through the 33,000-acre Cuyahoga Valley National Park. For a leisurely tour, rent a bicycle from Century Cycles in Peninsula and enjoy some of the Ohio's most scenic trails.

Get there
Go south on Interstate 271. Jump off at Route 303 and head east about two miles to downtown Peninsula. Century Cycles will be on the north side of the street, just after the bridge but before the rail road tracks.

The trail
The Ohio & Erie Canal Towpath Trail was developed by the National Park Service as a multi-purpose trail. It will take you to the natural and historic sights in the park. You can also connect with other trails, including the bike and hike trails at the Ohio & Erie Canl Reservation of the Cleveland Metroparks in Cuyahoga Heights in the Cleveland area's industrial valley.

Rent a bike
If you don't have your own bicycle, Century Cycles will have you pedaling in no time. Their 50 bicycles rent for $7 per hour, which includes a safety helmet. Most rent a bicycle for a couple of hours, so the turnover is high and bicycles are usually available. There are bikes of all sizes to accomodate adults and children, as well as trailers to carry the younger members of the family or tag-a-long models for kids who are a little older. Reservations are not taken.

Inside tip
The weekend traffic can be heavy on the Cuyahoga Valley National Park trails, so aim for a weekday adventure. If you have your own bicycle, there are 10 trail heads where you can access the Towpath Trail, the same path mules used for towing canal boats filled with goods.

What to bring
Take along a sense of adventure and check out the trail maps. A northerly trip will take you to the Boston Store Trailhead, where cold beverages are available. You can also plan a short trip followed by a stop at the Winking Lizard, near Century Cycles in Peninsula, for chilly adult beverages.

Degree of difficulty
The Towpath Trail is flat, quiet, cool and very scenic. It is easy to pedal, so bike a few miles or plan an all-day adventure.

Highlights
Century Cycles owner Scott Cowan likes to bicycle south and stop at Beaver Marsh, where paddle-tailed beavers have constructed a huge home, and on to the blue heron rookery a little farther south. Stop late in the day and listen to the herons make a racket as they gather by the dozens.

Information
Check out the may bicycling possibilities at www.nps.gov/cuva. Visit the Century Cycles web site at www.centurycycles.com.

D'Arcy Egan covers the outdoors for The Plain Dealer. Log on to www.cleveland.com/outdoors to read archived editions of D'Arcy's Destinations.