Chuck Yarborough of the Plain Dealer spent the day at our Peninsula store on June 14, 2008. Chuck's "On the Job Training" column is based on his experiences trying various unusual, scary, or dirty jobs in the Northeast Ohio region. On this day, he got his hands dirty as our Bicycle Rental Coordinator.

Chucks article about his day at CC appeared in the Thursday, June 19, 2008 edition of the Plain Dealer. See below for images and the full text of the article. 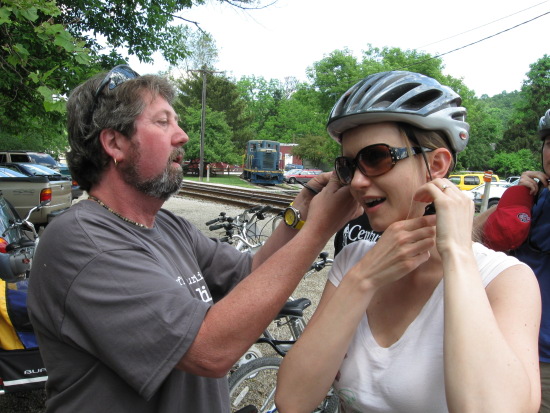 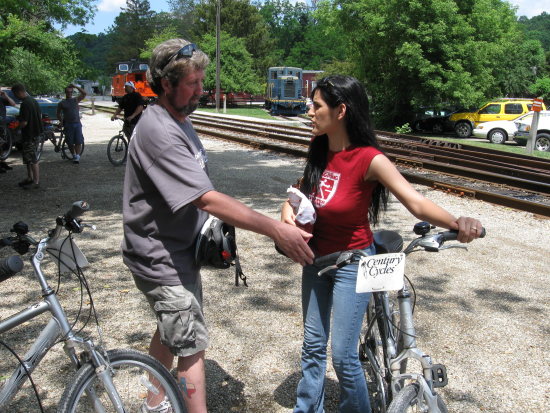 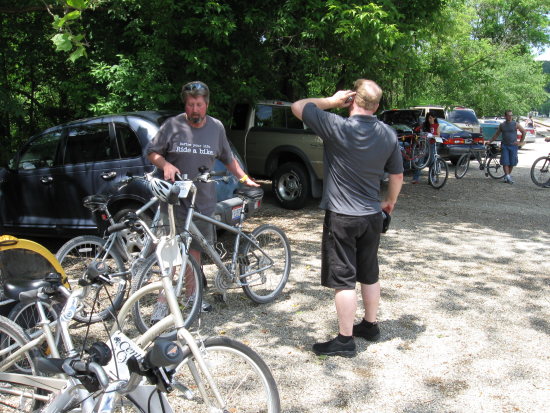 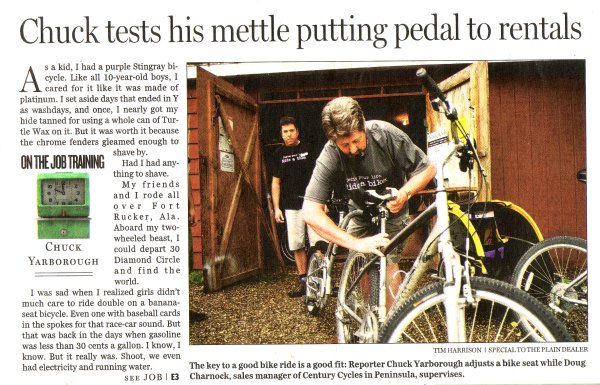 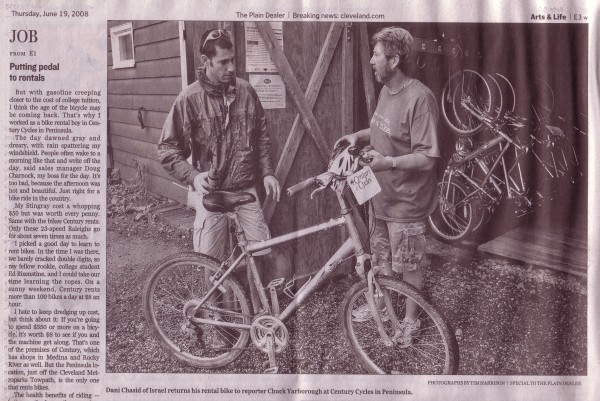 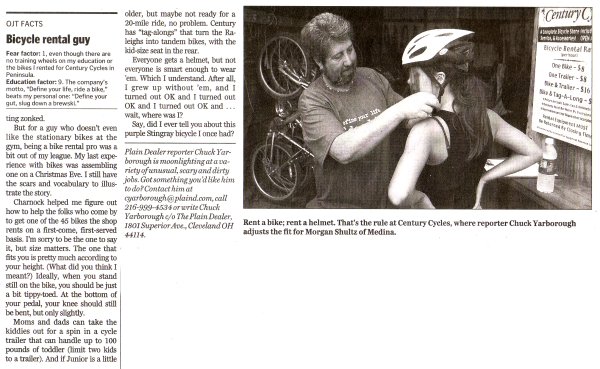 As a kid, I had a purple Stingray bicycle. Like all 10-year-old boys, I cared for it like it was made of platinum. I set aside days that ended in Y as washdays, and once, I nearly got my hide tanned for using a whole can of Turtle Wax on it. But it was worth it because the chrome fenders gleamed enough to shave by.

Had I had any thing to shave.

My friends and I rode all over Fort Rucker, Ala. Aboard my two- wheeled beast, I could depart 30 Diamond Circle and find the world.

I was sad when I realized girls didn't much care to ride double on a banana-seat bicycle. Even one with baseball cards in the spokes for that race-car sound. But that was back in the days when gasoline was less than 30 cents a gallon. I know, I know. But it really was. Shoot, we even had electricity and running water.

But with gasoline creeping closer to the cost of college tuition, I think the age of the bicycle may be coming back. That's why I worked as a bike rental boy in Century Cycles in Peninsula.

The day dawned gray and dreary, with rain spattering my windshield. People often wake to a morning like that and write off the day, said sales manager Doug Charnock, my boss for the day. It's too bad, because the afternoon was hot and beautiful. Just right for a bike ride in the country.

My Stingray cost a whopping $50 but was worth every penny. Same with the bikes Century rents. Only these 23-speed Raleighs go for about seven times as much.

I picked a good day to learn to rent bikes. In the time I was there, we barely cracked double digits, so my fellow rookie, college student Ed Bixenstine, and I could take our time learning the ropes. On a sunny weekend, Century rents more than 100 bikes a day at $8 an hour.

I hate to keep dredging up cost, but think about it: If you're going to spend $350 or more on a bicycle, it's worth $8 to see if you and the machine get along. That's one of the premises of Century, which has shops in Medina and Rocky River as well. But the Peninsula location, just off the Cleveland Metroparks Towpath, is the only one that rents bikes.

The health benefits of riding -- better on the knees than running, good cardio, and so on -- are well-known. But it's fun for the guys doing the renting, too. Charnock, who's 34 and who has been with Century for more than a decade, can tell you that. For one thing, it's a cool way to promote a healthy lifestyle, he said. And for another, well, let's just say it's a good place to people watch. And the variety of people is as wide as some of the bottoms you see.

Note to some: Bike shorts are called compression shorts, not miracle shorts. They're designed as they are A) to help promote blood flow and B) to avoid flapping in the wind.

Our first customer of the day was a fit young man from Israel. International and vacationing customers make up a large portion of the store's clientele, as well as the regular locals. Apparently, this biking thing is addictive. I could even get used to it, since there's a Winking Lizard right next to the Century shop.

Plus, there's the Cuyahoga Valley Scenic Railroad, which could ease my pain. The shop and the railroad have a deal: a $2 "bike and board" ticket lets you and your bike ride the train to any one of the stops, from Akron Northside to Rockside Road in Independence, and bike back. Nice little ride, and you don't have to worry about getting zonked.

But for a guy who doesn't even like the stationary bikes at the gym, being a bike rental pro was a bit out of my league. My last experience with bikes was assembling one on a Christmas Eve. I still have the scars and vocabulary to illustrate the story.

Charnock helped me figure out how to help the folks who come by to get one of the 45 bikes the shop rents on a first-come, first-served basis. I'm sorry to be the one to say it, but size matters. The one that fits you is pretty much according to your height. (What did you think I meant?) Ideally, when you stand still on the bike, you should be just a bit tippy-toed. At the bottom of your pedal, your knee should still be bent, but only slightly.

Moms and dads can take the kiddies out for a spin in a cycle trailer that can handle up to 100 pounds of toddler (limit two kids to a trailer). And if Junior is a little older, but maybe not ready for a 20-mile ride, no problem. Century has "tag-alongs" that turn the Raleighs into tandem bikes, with the kid-size seat in the rear.

Say, did I ever tell you about this purple Stingray bicycle I once had?

Fear factor: 1, even though there are no training wheels on my education or the bikes I rented for Century Cycles in Peninsula.

Education factor: 9. The company's motto, "Define your life, ride a bike," beats my personal one: "Define your gut, slug down a brewski."

Plain Dealer reporter Chuck Yarborough is moonlighting at a variety of unusual, scary and dirty jobs. Got something you'd like him to do? Contact him at cyarborough@plaind.com , call 216-999-4534 or write Chuck Yarborough c/o The Plain Dealer, 1801 Superior Ave., Cleveland OH 44114.