From the April 15, 2007 issue of Bicycle Retailer and Industry News: 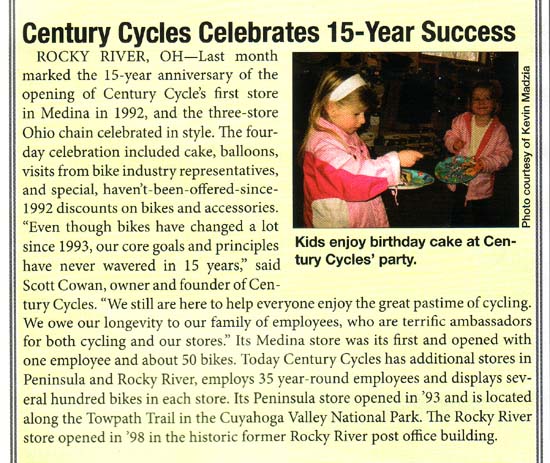 ROCKY RIVER, OH - Last month marked the 15-year anniversary of the opening of Century Cycle's first store in Medina in 1992, and the three-store Ohio chain celebrated in style. The four-day celebration included cake, balloons, visits from bike industry representatives, and special, haven't-been-offered-since-1992 discounts on bikes and accessories. "Even though bikes have changed a lot since 1993, our core goals and principles have never wavered in 15 years," said Scott Cowan, owner and founder of Century Cycles. "We still are here to help everyone enjoy the great pastime of cycling. We owe our longevity to our family of employees, who are terrific ambassadors for both cycling and our stores." Its Medina store was its first and opened with one employee and about 50 bikes. Today Century Cycles has additional stores in Peninsula and Rocky River, employs 35 year-round employees and displays several hundred bikes in each store. Its Peninsula store opened in '93 and is located along the Towpath Trail in the Cuyahoga Valley National Park. The Rocky River store opened in '98 in the historic Rocky River post office building.