From the April 1, 2009 edition of the Bicycle Retailer and Industry News: 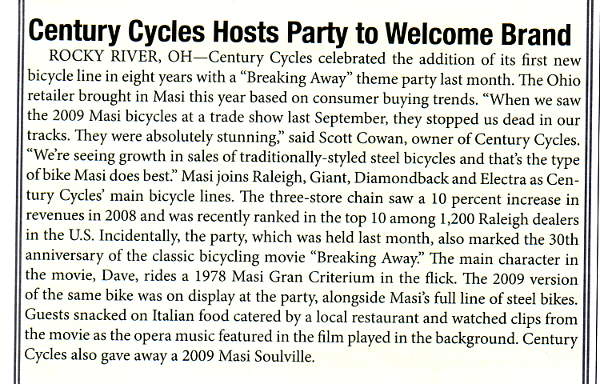 ROCKY RIVER, OH -- Century Cycles celebrated the addition of its first new bicycle lin in eight years with a "Breaking Away" theme party last month. The Ohio retailer brought in Masi this year based on consumer buying trends. "When we saw the 2009 Masi bicycles at a trade show last September, they stopped us dead in our tracks. They were absolutely stunning," said Scott Cowan, owner of Century Cycles. "We're seeing growth in sales of traditionally-styled steel bicycles and that's the type of bike Masi does best." Masi joins Raleigh, Giant, Diamondback and Electra as Century Cycles' main bicycle lines. The three-store chain saw a 10 percent increase in revenues in 2008 and was recently ranked in the top 10 among 1,200 Raleigh dealers in the U.S. Incidentally, the party, which was held last month, also marked the 30th anniversary of the classic bicycling movie "Breaking Away." The main character in the movie, Dave, rides a 1978 Masi Gran Criterium in the flick. The 2009 version of the same bike was on display at the party, alongside Masi's full line of steel bikes. Guests snacked on Italian food catered by a local restaurant and watched clips from the movie as the opera music featured in the film played in the background. Century Cycles also gave away a 2009 Masi Soulville.