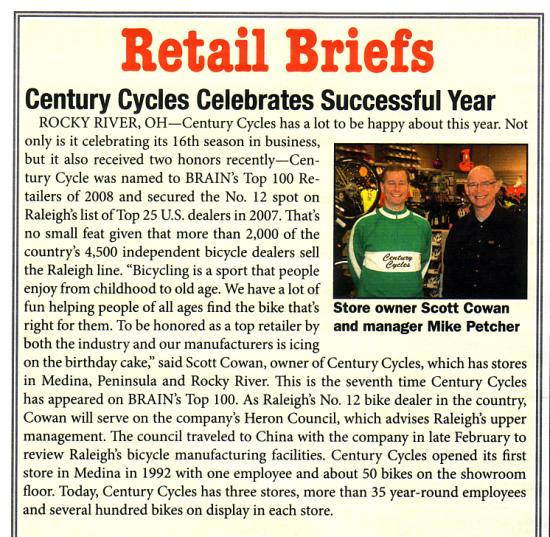 ROCKY RIVER, OH -- Century Cycles has a lot to be happy about this year. Not only is it celebrating its 16th season in business, but it also received two honors recently--Century Cycle[s] was named to BRAIN's Top 100 Retailers of 2008 and secured the No. 12 spot on Raleigh's list of Top 25 U.S. Dealers in 2007. That's no small feat given that more than 2,000 of the country's 4,500 independent bicycle dealers sell the Raleigh line. "Bicycling is a sport that people enjoy from childhood to old age. We have a lot of fun helping people of all ages find the bike that's right for them. To be honored as a top retailer by both the industry and our manufacturers is icing on the birthday cake," said Scott Cowan, owner of Century Cycles, which has stores in Medina, Peninsula and Rocky River. This is the seventh time Century Cycles has appeared on BRAIN's Top 100. As Raleigh's No. 12 bike dealer in the country, Cowan will serve on the company's Heron Council, which advises Raleigh's upper management. The council traveled to China with the company in late February to review Raleigh's bicycle manufacturing facilities. Century Cycles opened its first store in Medina in 1992 with one employee and about 50 bikes on the showroom floor. Today, Century Cycles has three stores, more than 35 year-round employees and several hundred bikes on display in each store.