From the May 2009 issue of Bike Midwest Magazine: 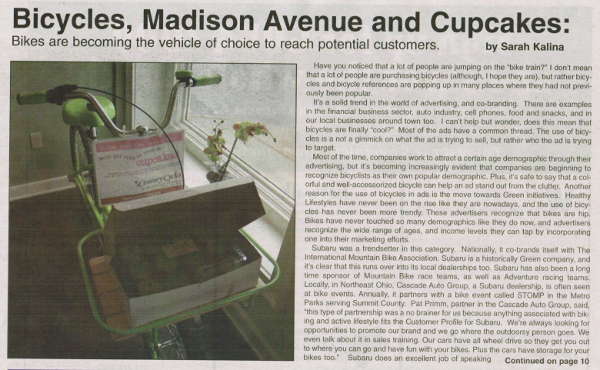 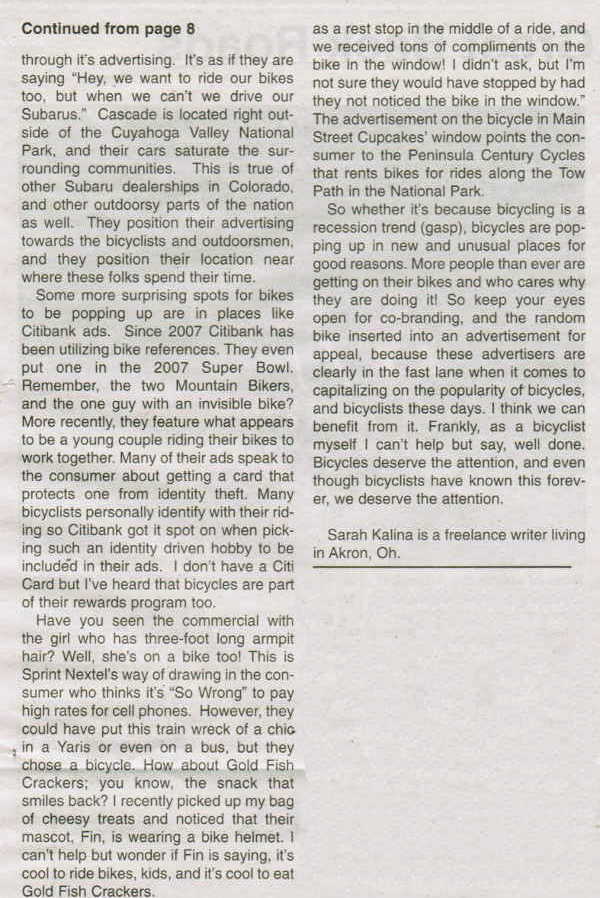 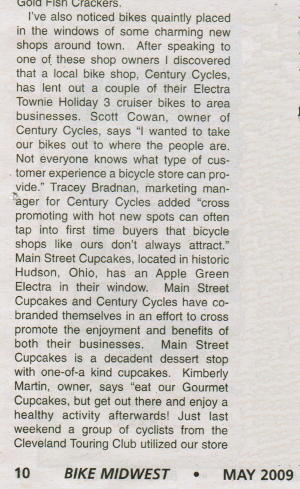 Bikes are becoming the vehicle of choice to reach potential customers.

It's a solid trend in the world of advertising, and co-branding. There are examples in the financial business sector, auto industry, cell phones, food and snacks, and in our local businesses around town too. I can't help but wonder, does this mean that bicycles are finally "cool?" Most of the ads have a common thread. The use of bicycles is a not a gimmick on what the ad is trying to sell, but rather who the ad is trying to target.

Most of the time, companies work to attract a certain age demographic through their advertising, but it's becoming increasingly evident that companies are beginning to recognize bicyclists as their own popular demographic. Plus, it's safe to say that a colorful and well-accessorized bicycle can help an ad stand out from the clutter. Another reason for the use of bicycles in ads is the move towards Green initiatives. Healthy Lifestyles have never been on the rise like they are nowadays, and the use of bicycles has never been more trendy. These advertisers recognize that bikes are hip. Bikes have never touched so many demographics like they do now, and advertisers recognize the wide range of ages, and income levels they can top by incorporating one into their marketing efforts.

Subaru was a trendsetter in this category. Nationally, it co-brands itself with The International Mountain Bike Association. Subaru is a historically Green company, and it's clear that this runs over into its local dealerships too. Subaru has also been a long time sponsor of Mountain Bike race teams, as well as Adventure racing teams. Locally, in Northeast Ohio, Cascade Auto Group, a Subaru dealership, is often seen at bike events. Annually, it partners with a bike event call STOMP in the Metro Parks serving Summit County. Pat Primm, partner in the Cascade Auto Group, said, "this type of partnership was a no brainer for us because anything associated with biking and active lifestyle fits the Customer Profile for Subaru. We're always looking for opportunities to promote our brand and we go where the outdoorsy person goes. We even talk about it in sales training. Our cars have all wheel drive so they get you out to where you can go and have fun with your bikes. Plus the cars have storage for your bikes too." Subaru does an excellent job of speaking through it's advertising. It's as if they are saying "Hey, we want to ride our bikes too, but when we can't we drive our Subarus." Cascade is located right outside of the Cuyahoga Valley National Park, and their cars saturate the surrounding communities. This is tru of other Subaru dealerships in Colorado, and other outdoorsy parts of the nation as well. They position their advertising towards the bicyclists and outdoorsmen, and they position their location near where these folks spend their time.

Some more surprising spots for bikes to be popping up are in places like Citibank ads. Since 2007 Citibank has been utilizing bike references. They even put on in the 2007 Super Bowl. Remember, the two Mountain Bikers, and the one guy with an invisible bike? More recently, they feature what appears to be a young couple riding their bikes to work together. Many of their ads speak to the consumer about getting a card that protects one from identity theft. Many bicyclists personally identify with their riding so Citibank got it spot on when picking such an identity driven hobby to be included in their ads. I don't have a Citi Card but I've heard that bicycles are part of their rewards program too.

Have you seen the commercial with the girl who has three-foot long armpit hair? Well, she's on a bike too! This is Sprint Nextel's way of drawing in the consumer who thinks it's "So Wrong" to pay high rates for cell phones. However, they could have put this train wreck of a chic in a Yaris or even on a bus, but they chose a bicycle. How about Gold Fish Crackers; you know, the snack that smiles back? I recently picked up my bag of cheesy treats and noticed that their mascot, Fin, is wearing a bike helmet. I can't help but wonde if Fin is saying, it's cool to ride bikes, kids, and it's cool to eat Gold Fish Crackers.

I've also noticed bikes quaintly placed in the windows of some charming new shops around town. After speaking to one of these shop owners I discovered that a local bike shop, Century Cycles, has lent out a couple of their Electra Townie Holiday 3 cruiser bikes to area businesses. Scott Cowan, owner of Century Cycles, says "I wanted to take our bikes out to where the people are. Not everyone knows what type of customer experience a bicycle store can provide." Tracey Bradnan, marketing manager for Century Cycles added "cross promoting with hot new spots can often tap into first time buyers that bicycle shops like ourse don't always attract." Main Street Cupcakes, located in historic Hudson, Ohio, has an Apple Green Electra in their window. Main Street Cupcakes and Century Cycles have co-branded themselves in an effort to cross promote the enjoyment and benefits of both their businesses. Main Street Cupcakes is a decadent dessert stop with one-of-a-kind cupcakes. Kimberly Martin, owner, says "eat our Gourmet Cupcakes, but get out there and enjoy a healthy activity afterwards! Just last weekend a group of cyclists from the Cleveland Touring Club utilized our store as a rest stop in the middle of a ride, and we received tons of compliments on the bike in the window! I didn't ask, but I'm not sure they would have stopped by had they not noticed the bike in the window." The advertisement on the bicycle in Main Street Cupcakes' window points the consumer to the Peninsula Century Cycles that rents bikes for rides along the Tow Path in the National Park.

So whether it's because bicycling is a recession trend (gasp), bicycle are popping up in new and unusual places for good reasons. More people than ever are getting on their bikes and who cares why they are doing it! So keep your eyes open for co-branding, and the random bike inserted into an advertisement for appeal, because these advertisers are clearly in the fast lane when it comes to capitalizing on the popularity of bicycles, and bicyclists these days. I think we can benefit from it. Frankly, as a bicyclist myself I can't help but say, well done. Bicycles deserve the attention, and even though bicyclists have known this forever, we deserve the attention.

Sarah Kalina is a freelance writer living in Akron, Oh.