Imagine a radio station telling drivers to throw cans at cyclists or pass them, hit the brakes and fling open the passenger door.

That actually happened in Cleveland. For a week in July, some morning-show miscreants (on a station we won't publicize) made a running "joke" out of harassing cyclists.

When people phoned in to explain cyclists' rights, they were mocked and insulted.

One of the callers was bike-shop owner Lois Cowan of Century Cycles. The DJs offered her an 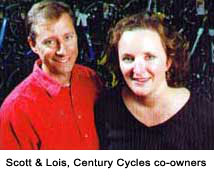 interview, then used it to brand her a "PMS sufferer," "stupid" and a person who "can't take a joke."

Cowan sent e-mail about the situation to cycling advocacy lists. Hundreds of riders nationwide contacted the station's owner, Clear Channel Communications, one of the world's largest media companies, with letters, e-mail and phone calls. They protested reasonably and civilly, which made the right impression.

The DJs were ordered to apologize publicly. Too bad they weren't made to ride to work for a month.

This story is provided courtesy of RoadBikeRider.com and Ben Delany of Bicycle Retailer & Industry News.