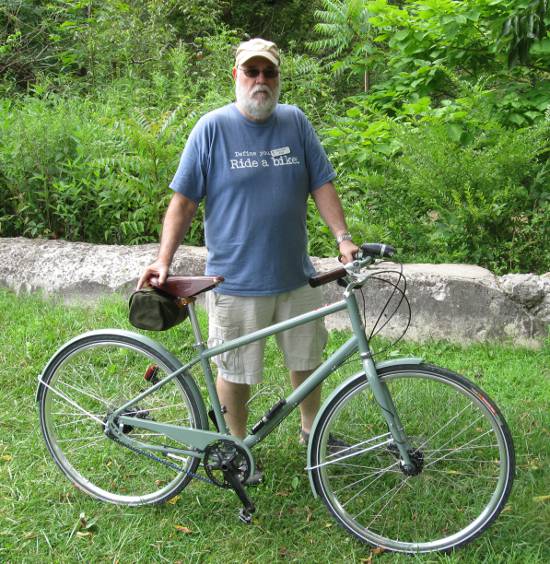 Paul Gallmeier has been working part-time at the Century Cycles store in Peninsula since 2010. In the spring of 2011, he purchased his Raleigh Alley Way bicycle, after he had "been lusting after it for over a year," as he puts it. He says he was "intrigued" by the elegant bend of the handlebar, which like the fenders and stem, perfectly matches the color of the frame. He also liked the idea of the simple, low-maintenance 8-speed internally geared drive train with the Gates Carbon Belt Drive. The leather Brooks saddle and matching grips add the final touch of class. Paul says he wanted a bike that would "look at home on the streets of London." Or any bike-friendly city, he was quick to add.

Paul appointed the Alley Way with a classically-styled canvas seat bag from Carradice, a stainless steel bottle cage, and the Planet Bike Blaze Dynamo headlight, which works well with the front generator hub that cames standard on the bike. He likes riding the bike to his local gym and on the Towpath Trail (including our Night Rides on the Towpath Trail).