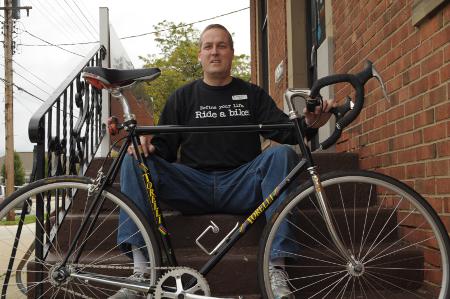 If you're riding to a cool place like Deagan's Kitchen & Bar for Bike Night, it's even more fun when you have a cool bike to ride. And Ken Hagedorn in our Rocky River store had a very cool bike to ride when we shut down the stores early last month to ride to Deagan's - his Torelli road bike.

Near as Ken can figure, the Torelli frame is from 1995 or 1996 and is likely to be the Corsa Strada model. Years ago, when Century Cycles sold Colnago frames, a customer bought a Colnago and was eager to sell his Torelli steel road bike frame along with the fork and headset. Ken bought it, worked on it for years as time and money became available, and now the Torellis is his bopping-around-the-city bike.

"I love it. It's a classic bike that looks really clean. Nothing is flashy or garish." Although it looks like a hipster fixie, Ken is quick to point out he is neither a hipster nor is his Torelli a fixie. Although a singlespeed, the Torelli is a road bike with quick release wheels on the front and back, a rear brake (with a dummy hood on the left), and platform pedals so Ken can ride to the store and around town in regular shoes.